Astrophysicists have taken a major step forward in understanding how supermassive black holes formed. Using data from Hubble and two other space telescopes, Italian researchers have found the best evidence yet for the seeds that ultimately grow into these cosmic giants. 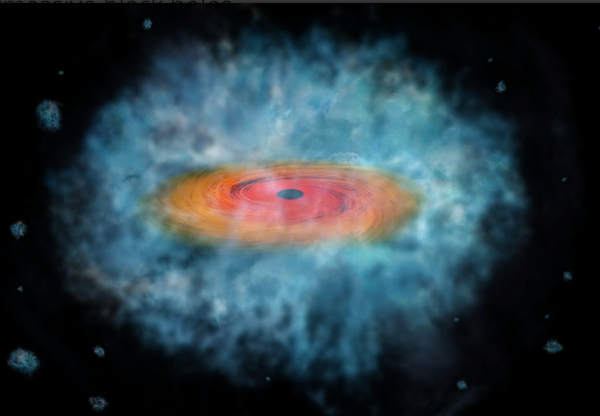 The group used computer models and applied a new analysis method to data from the NASA Chandra X-ray Observatory, the NASA/ESA Hubble Space Telescope, and the NASA Spitzer Space Telescope to find and identify the two objects. Both of these newly discovered black hole seed candidates are seen less than a billion years after the Big Bang and have an initial mass of about 100 000 times the Sun.

“Our discovery, if confirmed, would explain how these monster black holes were born,” said Fabio Pacucci, lead author of the study, of Scuola Normale Superiore in Pisa, Italy.

This new result helps to explain why we see supermassive black holes less than one billion years after the Big Bang.

The new findings support another scenario where at least some very massive black hole seeds with 100 000 times the mass of the Sun formed directly when a massive cloud of gas collapses. In this case the growth of the black holes would be jump started, and would proceed more quickly.

“There is a lot of controversy over which path these black holes take,” said co-author Andrea Ferrara also of Scuola Normale Superiore. “Our work suggests we are converging on one answer, where black holes start big and grow at the normal rate, rather than starting small and growing at a very fast rate.”

Andrea Grazian, a co-author from the National Institute for Astrophysics in Italy explains: “Black hole seeds are extremely hard to find and confirming their detection is very difficult. However, we think our research has uncovered the two best candidates so far.”

Even though both black hole seed candidates match the theoretical predictions, further observations are needed to confirm their true nature. To fully distinguish between the two formation theories, it will also be necessary to find more candidates.

The team plans to conduct follow-up observations in X-rays and in the infrared range to check whether the two objects have more of the properties expected for black hole seeds. Upcoming observatories, like the NASA/ESA/CSA James Webb Space Telescope and the European Extremely Large Telescope will certainly mark a breakthrough in this field, by detecting even smaller and more distant black holes.