The University of California, San Diego’s outdoor shake table in Scripps Ranch will soon give engineers a truer sense of the fury released when big earthquakes erupt in places around the world. 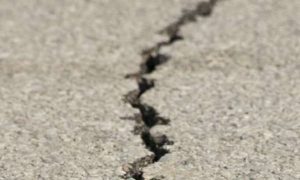 The National Science Foundation gave the school $16.3 million to upgrade the center so it can more accurately simulate quakes, a complex phenomenon that in some years kills hundreds of thousands of people worldwide.

The table is the largest of its kind and has conducted experiments that have led to tougher building and design codes for bridges and housing. But it can move structures only backward and forward. Quakes can move the ground in many directions.

Engineers will modify the table so that it also can move up and down, right and left, and simulate the pitch, roll and yaw that can come with ground motion. Collectively, these movements are called the “six degrees of freedom.”

The upgrade involves adding pistons and power to a table that’s used by researchers from around nation to simulate quakes big enough to send seismic waves coursing through the earth for weeks.

“We will be able to reproduce earthquake motions with the most accuracy of any shake table in the world,” said Joel Conte, the structural engineer who is overseeing the project. “This will accelerate the discovery of the knowledge engineers need to build new bridges, power plants, dams, levees, telecommunication towers, wind turbines, retaining walls, tunnels, and to retrofit older structures. It will enhance the resiliency of our communities.”

The upgrade comes at a worrisome time in California.

In June, the U.S. Geological Survey said 38 high-rise buildings in San Francisco constructed between 1964 and 1994 could buckle if they were hit by the type of earthquake that devastated the city in 1906. The list includes the Transamerica Pyramid in the Financial District.

There’s also concern about a newer skyscraper, the 58-story Millennium Tower, which has been sinking and tilting, making it more vulnerable to big quakes.

In 2017, the Earthquake Engineering Research Institute released a report that says that 2,000 people could die in San Diego if a 6.9 magnitude quake erupts on the Rose Canyon fault, which runs through the heart of the city. Potential property damage: $40 billion.

The EERI emphasized that the figures are just estimates because modeling the complexities of earthquakes is hard to do with existing models and technology.

Even so, engineers have made progress.

Since it opened in the late 1980s, UC San Diego’s Powell Laboratories has been heavily involved in developing and testing key portions of roads and bridges, leading to changes in building codes.

The shake table was added in 2004 to give scientists and engineers better ability to test large structures, from wood-frame buildings to bridge columns to a 70-foot wind turbine.

The need for such a table had been apparent for decades.

The 6.7 magnitude Northridge quake in 1994 appears to have caused the ground to move vertically and horizontally. That vertical movement may be the reason that some bridge support columns rose and pierced the decks of bridges.

Such wild ground motion wasn’t unknown to engineers. The 1971 San Fernando earthquake, which measured 6.6, appears to have caused the soil to rotate in some areas. That, in turn, may have caused some buildings to turn like corkscrews.

The movement contributed to the billions of dollars in property damage inflicted by the quake.

The table has been used to simulate some of those jarring events, notably the Northridge quake.

That earthquake caused the collapse of a parking garage at Cal State Northridge. Engineers from the University of Arizona built a similar garage in 2008, and then shook it harder than the real quake.

The experiment revealed a great deal about how such structures absorb and distribute energy, leading to a strengthening of national building codes.

More recently, a team led by UC San Diego built and tested a five-story building that had many of the features of a hospital—such as an ICU and a surgery suite—and a working elevator and a sprinkler system. The goal was to understand what would happen inside a hospital during a catastrophic quake.

To ensure that they didn’t miss anything, engineers placed 500 sensors in and around the building, and installed 70 cameras.

Then they simulated several high-intensity earthquakes, and later set part of the building on fire to replicate a frequent aftereffect of quakes.

“What we are doing is the equivalent of giving a building an EKG,” lead engineer Tara Hutchinson said.

The experiment helped lead to the design of safer hospitals, and it was followed by a project that focused on a subject of great concern in California—four-story wood-frame residential buildings that have garages on the first floor.

The structures -built mostly in the 1920s, ’30s and ’40s—are now considered vulnerable to collapse in a huge quake.

In 2013, Colorado State University built one of the structures on the shake table and outfitted it with various types of retrofitting to see what would happen.

The result was good, and bad.

The building survived shake tests with the retrofitting in place. When it was taken out, calamity ensued.

“There was creaking and crunching, then a thunderous collapse, followed by dust and debris floating up,” said John W. van de Lindt, the Colorado State engineer who led the project.

Now, Lindt is drawing up plans for a 10-story building that will be built on the same spot. But this time, he’ll be able to move the building in any direction he wants.

“The U.S. and California have really been at the forefront of this kind of research,” Lindt said. “The upgrade will help us keep pace with the world. We really need this.”