Hurricane Fabio is expected to quickly intensify into a major hurricane, the third of the eastern Pacific hurricane season, and has already become the record-earliest “F” storm in that active basin in 2018. 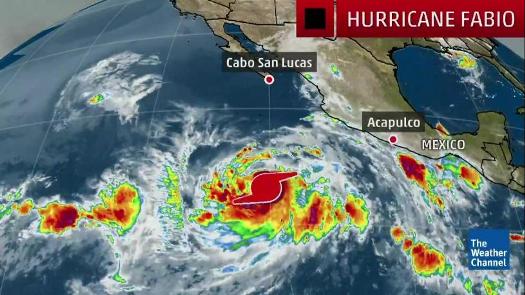 Fabio is currently more than 600 miles south-southwest of the southern tip of Mexico’s Baja California Peninsula, in the eastern Pacific Ocean.

On Monday afternoon, microwave satellite imagery indicated Fabio’s western eyewall was somewhat open, but the latest visible imagery suggested the eyewall was finally closing off, despite the presence of a dry slot wrapping around the western and southern portions of the inner core.

The National Hurricane Center said rapid intensification – an increase in the peak sustained winds of at least 35 mph in 24 hours or less – is likely into Tuesday.

Fabio is no direct threat to land, expected to continue west-northwestward, but it could reach Category 3 status by Tuesday before weakening over colder water.

Fabio may eventually produce some larger swells that may affect the Pacific beaches of Mexico, particularly the Baja Peninsula, as well as some Southern California beaches later in the week.

Fabio could become the third major – Category 3 or stronger – hurricane of this young eastern Pacific hurricane season. In early to mid-June, Aletta, then Bud each became Category 4 hurricanes in just over three days’ time.

Overall, eastern Pacific tropical activity was running about two to three weeks ahead of the average pace, as tracked by the ACE index, according to Klotzbach.

In contrast to the highly sheared, suppressed Atlantic Basin, wind shear has remained low, and sea-surface temperatures have generally been warmer-than-average over the tropical eastern Pacific Basin, helping to support the development of these six named storms in less than a month’s time.