Tropical storm Philippe is moving across Florida and towards New York with major rain and winds battering parts of the United States. 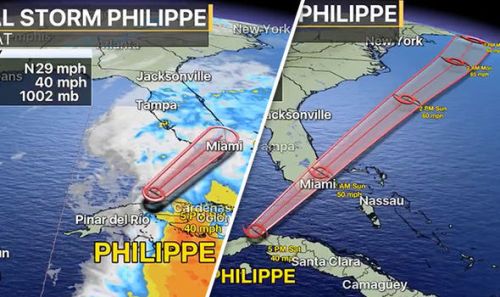 Tropical storm Philippe, with winds of up to 40mph, is heading northwestward across southern Florida in the United States, according to US weather team StormTracker 13.

Philippe is set to cause three to five inches of rain across south Florida over the weekend.

Heavy rain and gusty winds are predicted to hit parts of Cuba and Florida on Sunday.

The National Hurricane Center has issued an alert for mainland USA including the Keys and New York as Philippe heads north across the country.

Tropical storm Philippe is currently travelling at 12mph. The NOAA have confirmed at 2am EDT that a rapid motion toward the northeast is expected through Monday.

On the forecast track, the centre of Philippe will move across the Florida Keys or the southern tip of the Florida peninsula this morning, and across the northwestern Bahamas later today.

Tropical-storm-force winds extend outward up to 105 miles (165 km) mainly to the east and southeast of the centre.