Residents along India’s eastern coast are being warned about potential impacts from Cyclonic Storm Fani this week, while no relief will come from the dangerous heat in the nation’s northern and western regions. 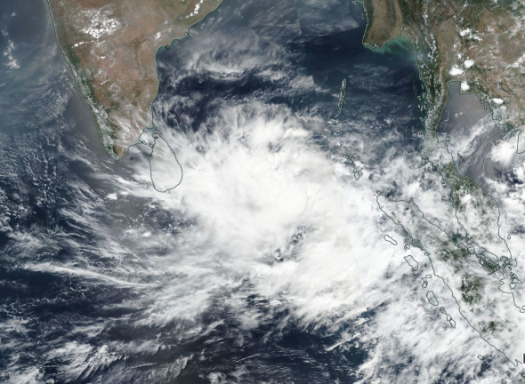 Seas will build and become dangerous for boaters and swimmers around the southern Bay of Bengal as the storm intensifies.

Residents along the eastern coast of India are being alerted to potential other hazards.

“The main threats from this storm will be heavy rain, flooding and damaging wind gusts,” AccuWeather Senior Meteorologist Jason Nicholls said, “but the exact amount of rain and strength of the winds will be dependent on how close it tracks to the coast.”

Latest indications spare Sri Lanka and Tamil Nadu in India from the brunt of the cyclone’s rain and wind.

Even if the storm bypasses Sri Lanka and Tamil Nadu, areas to the north may not be as fortunate.

One scenario for the storm is to threaten the coast from northern Andhra Pradesh to Odisha and West Bengal with heavy rain and wind later this week into the weekend.

Landfall as a dangerous tropical cyclone may occur in this scenario putting millions of people at risk for damaging winds, inundating storm surge, and flooding rainfall. Locations from Visakhapatnam northward to the border with Bangladesh are at risk for landfall at this time.

Beyond West Bengal, flooding rain and strong winds may accompany the storm as it slams into Bangladesh with an eventual track into northeastern India later in the weekend or early next week.

A second scenario would keep the worst impacts from Fani offshore from India as the storm tracks northward across the Bay of Bengal this week.

Coastal locations may see brief downpours and gusty winds; however, damaging winds and widespread flooding would not be expected.

A direct hit on Bangladesh or northern Myanmar would be possible in this scenario bringing life-threatening impacts to the region from this weekend into early next week.

Download the free AccuWeather app to remain aware of the latest projected path of the cyclone and any threats for your community.

Regardless of the storm’s exact track, it will not press far enough inland to bring any heat relief to northern and western India.

Thursday marked the hottest day so far this year in the National Capital Region (NCR), when temperatures soared to 43.2 C (109.8 F) at the Indira Gandhi International Airport.

Similar temperatures were felt across the city and surrounding NCR from Saturday into Monday.

Temperatures will remain dangerously high each day this week across the NCR and much of central and northern India.

“India endures lengthy heat waves each year prior to the arrival of monsoonal rainfall; however, this heat has arrived earlier than normal in recent years, putting more people at risk for heat-related illnesses,” AccuWeather Senior Meteorologist Eric Leister said.

Residents will have to continue to take the necessary precautions to avoid heat-related illnesses.

Drinking plenty of water, spending time in the shade and wearing light clothing will be necessary. When possible, strenuous outdoor activity should be avoided during the hottest part of the day.

Stagnant conditions contributing to the high heat are also resulting in dangerously poor air quality conditions. Face masks should be worn by anyone spending time outdoors. Children, the elderly and those with respiratory or cardiovascular health conditions should avoid spending time outside as much as possible.