Saturday’s tsunami in Indonesia was caused by a chunk of the volcanic Anak Krakatau island slipping into the ocean, it was confirmed on Monday, as officials at the country’s natural disaster agency said it must develop a new tsunami early warning system. 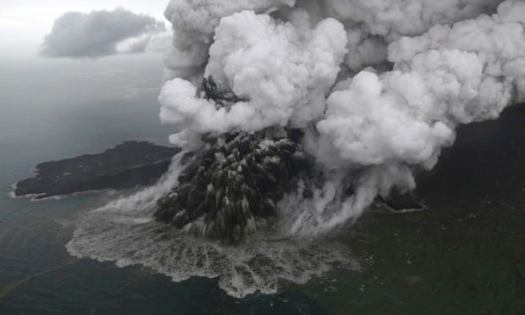 At least 373 people were killed, hundreds injured and many buildings were heavily damaged when the tsunami struck, almost without warning, along the rim of the Sunda Strait, between Java and Sumatra islands.

Anak Krakatau had been spewing ash and lava for months before a 64-hectare section of its south-west side collapsed, an Indonesian official said. “This caused an underwater landslide and eventually caused the tsunami,” Dwikorita Karnawati, the head of the meteorological agency, said.

Images captured by the European Space Agency’s Sentinel-1 satellite showed that a large portion of the southern flank of the volcano had slid off into the ocean, scientists said.

The fact the tsunami was triggered by a volcano rather than an earthquake meant no tsunami warning was triggered, scientists said. Coastal residents reported not seeing or feeling any warning signs before waves of up to three meters high surged in.

Hundreds of military personnel and volunteers spent Monday scouring beaches strewn with debris in search of survivors. At least 1,459 people were injured and more than 600 homes, 60 shops and 420 vessels damaged when the tsunami struck.

“Indonesia must build an early warning system for tsunamis that are generated by underwater landslides & volcanic eruptions … Landslides triggered the 1992 Maumere tsunami and the Palu 2018 tsunami.”

He also said Indonesia’s tsunami buoy network had “not been operational since 2012”. “Vandalism, a limited budget, and technical damage mean there were no tsunami buoys at this time,” he said. “They need to be rebuilt to strengthen the Indonesian tsunami early warning system.”

Sutopo said on Twitter: “Anak Krakatau has been erupting since June 2018 until now,” he said. “Yesterday’s eruption was not the biggest. The October-November 2018 period had a larger eruption.”

The death toll is expected to rise as 128 people were still missing on Monday. At least 1,600 people have also been displaced.Dody Ruswandi, a senior official at the disaster agency, added that the rescue effort was likely to last a week.

The University of Queensland volcanologist Teresa Ubide said Anak Krakatau had been erupting for the past few months, which was not unusual. “It seems like the volcano is active at the moment and it may happen again,” Ubide said.

“The volcano is very close to the shoreline so … there wouldn’t be much time to warn because it’s close and the tsunamis can travel very fast,” she said. The lack of seismic activity that would accompany an earthquake was also significant, she said.

Richard Teeuw of the University of Portsmouth said sonar surveys were needed to map the seafloor around the volcano, but that work usually took months. “The likelihood of further tsunamis in the Sunda Strait will remain high while Anak Krakatau volcano is going through its current active phase because that might trigger further submarine landslides,” he said.

he said the group was preparing for the possibility of diseases breaking out in the tsunami zone, adding: “The situation, and the death toll, will remain fluid over the next days and even weeks.”

The water washed away an outdoor stage where a local rock band, Seventeen, were performing, killing their bassist and manager. Other people who had been watching the band on the beach were missing.

Azki Kurniawan, 16, said his first warning about the tsunami was when people burst into the lobby of the Patra Comfort Hotel shouting: “Sea water rising!”

Kurniawan, who was undergoing vocational training with a group of 30 other students, said he was confused because he had not felt a big earthquake. He said he ran to the parking lot to try to reach his motorbike but discovered it was already flooded.

“Suddenly, a one-metre wave hit me,” he said, his eyes red and swollen from crying. “I was thrown into the fence of a building about 30 metres from the beach and held onto the fence as strong as I could, trying to resist the water, which felt like it would drag me back into the sea. I cried in fear … ‘This is a tsunami?’ I was afraid I would die.”