Titan, the largest of Saturn’s more than 60 moons, has surprisingly intense rainstorms, according to research by a team of UCLA planetary scientists and geologists. Although the storms are relatively rare — they occur less than once per Titan year, which is 29 and a half Earth years — they occur much more frequently than the scientists expected. 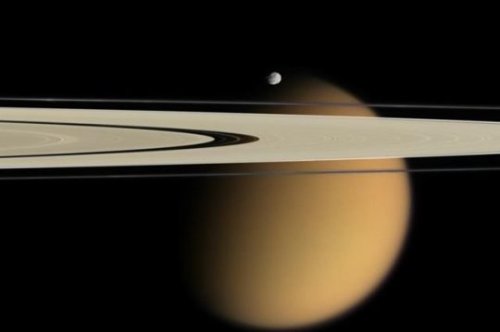 “I would have thought these would be once-a-millennium events, if even that,” said Jonathan Mitchell, UCLA associate professor of planetary science and a senior author of the research, which was published Oct. 9 in the journal Nature Geoscience. “So this is quite a surprise.”

The storms create massive floods in terrain that are otherwise deserts. Titan’s surface is strikingly similar to Earth’s, with flowing rivers that spill into great lakes and seas, and the moon has storm clouds that bring seasonal, monsoon-like downpours, Mitchell said. But Titan’s precipitation is liquid methane, not water.

“The most intense methane storms in our climate model dump at least a foot of rain a day, which comes close to what we saw in Houston from Hurricane Harvey this summer,” said Mitchell, the principal investigator of UCLA’s Titan climate modeling research group.

Sean Faulk, a UCLA graduate student and the study’s lead author said the study also found that the extreme methane rainstorms may imprint the moon’s icy surface in much the same way that extreme rainstorms shape Earth’s rocky surface.

On Earth, intense storms can trigger large flows of sediment that spread into low lands and form cone-shaped features called alluvial fans. In the new study, the UCLA scientists found that regional patterns of extreme rainfall on Titan are correlated with recent detections of alluvial fans, suggesting that they were formed by intense rainstorms.

The finding demonstrates the role of extreme precipitation in shaping Titan’s surface, said Seulgi Moon, UCLA assistant professor of geomorphology and a co-senior author of the paper. Moon said the principle likely applies to Mars, which has large alluvial fans of its own, and to other planetary bodies. Greater understanding of the relationship between precipitation and the planetary surfaces could lead to new insights about the impact of climate change on Earth and other planets.

Titan’s alluvial fans were detected by a radar instrument on the Cassini spacecraft, which began orbiting Saturn in late 2004. The Cassini mission ended in September 2017, when NASA programmed it to plunge into the planet’s atmosphere as a way to safely destroy the spacecraft.

Juan Lora, a UCLA postdoctoral scholar and a co-author of the paper, said Cassini has revolutionized scientists’ understanding of Titan.

Although Titan’s alluvial fans are a new discovery, scientists have had eyes on the moon’s surface for years. Shortly after Cassini reached Saturn, radar and other instruments showed that vast sand dunes dominated Titan’s lower latitudes, while lakes and seas dominated its higher latitudes. The UCLA scientists found that the alluvial fans are mostly located between 50 and 80 degrees latitude — close to the centers of the moon’s northern and southern hemispheres, but generally slightly closer to the poles than to the equator.

Such variations in surface features suggest the moon has corresponding regional variations in precipitation, because rainfall and subsequent runoff play a key role in eroding land and filling lakes, while the absence of rainfall promotes the formation of dunes.

Previous models have shown that liquid methane generally concentrates on Titan’s surface at higher latitudes. But no previous study had investigated the behavior of extreme rainfall events that might be capable of triggering major sediment transport and erosion, or shown their connection to surface observations.

The scientists primarily used computer simulations to study Titan’s hydrologic cycle because observations of actual precipitation on Titan are difficult to obtain and because, given the length of each year on Titan, Cassini only observed the moon for three seasons. They found that while rain mostly accumulates near the poles, where Titan’s major lakes and seas are located, the most intense rainstorms occur near 60 degrees latitude — precisely the region where alluvial fans are most heavily concentrated.

The study suggests that the intense storms develop due to the sharp differences between the wetter, cooler weather in the higher latitudes and the drier, warmer conditions in the lower latitudes. Similar temperature contrasts on Earth produce intense cyclones in the mid-latitudes, which is what creates the storms and blizzards that are common during the winter months across much of North America.

The research was funded by a NASA Cassini Data Analysis and Participating Scientists Program grant.