An international study led by researchers at Macquarie University has uncovered the ways in which giant meteorite impacts may have helped to kick-start our planet’s global tectonic processes and magnetic field. The study, being published in the premier journal Nature Geoscience, explores the effect of meteorite bombardment, in geodynamic simulations of the early Earth. 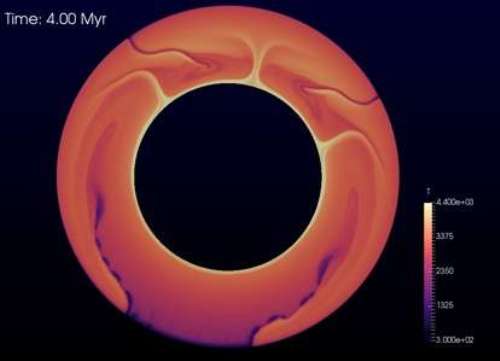 “Our results indicate that giant meteorite impacts in the past could have triggered events where the solid outer section of the Earth sinks into the deeper mantle at ocean trenches – a process known as subduction. This would have effectively recycled large portions of the Earth’s surface, drastically changing the geography of the planet,” explained lead author Associate Professor Craig O’Neill from Macquarie University.

To date, there is still not clear evidence to show whether plate tectonics operated in Earth’s early history, with the first 500 million years of our planet’s life, called the Hadean, often being dubbed as Earth’s geological dark ages. The little crust that has been preserved from this elusive period – mostly single grains of a mineral called zircon – has been used to argue for early tectonic activity. However, this is at odds with geochemical data and geodynamic simulations, which suggest that the Earth may instead have had a motionless ‘lid’ on its surface – in contrast to the actively moving combination of plates we see today.

“We know that meteorite impacts had a huge effect on the inner solar system at this time,” says Associate Professor O’Neill, “you only need to look at the Moon to see that. What isn’t clear was how our own impact history might have affected the planet’s evolution.”

“We’ve seen evidence of some geological activity that suggests something like subduction acted on the early Earth – but this is hard to reconcile with other geodynamic simulations. But if we consider Earth as part of an evolving early solar system, as opposed to only looking at the planet in isolation, then this evolution starts to make more sense,” he added.

O’Neill also notes that while the magnetic field for much of Earth’s ancient history has been quite low, but recent work has suggested field strengths up to present-day values existed between around 4.0-4.1 billion years ago.
“This is a really important age in the inner solar system. Impacting studies have suggested a big disturbance in the asteroid populations at this time, with perhaps a big upswing in impacts on the Earth. Our simulations show that larger amounts of meteorite collisions with the planet around this time could have driven the subduction process, explaining the formation of many zircons around this period, as well as the increase in magnetic field strength.”

Overall, the study adds evidence towards the fact that meteorite impacts likely had a role in the formation of the Earth that we know today.

“This work shows there is a strong connection between impacts and geophysical evolution capable of drastically altering a planet’s evolution,” said coauthor Dr Simone Marchi from the Southwest Research Institute in the USA.

“One has to wonder, how much of the current Earth, and other terrestrial planets, is the result of collisions that took place eons ago?” Dr Marchi concluded.