The National Weather Service confirmed a tornado touched down in Laurel, Delaware, overnight, leaving behind a path of destruction for miles. Officials say an EF-2 tornado, with maximum wind speeds of 120 mph, tore through the town. 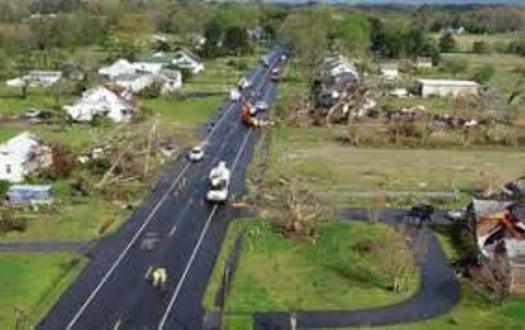 The tornado traveled 6.2 miles and ended in Seaford, Delaware.

Drone video from the Laurel Fire Department shows the path of destruction left by the tornado in Sussex County. The storm’s 120 mph winds ripped apart homes and barns and many roads were blocked by downed power lines. Some buildings were also completely decimated.

McWilliams, of Laurel, was sleeping when fast-moving winds ripped the roof off above her bedroom.

She tried finding anywhere in her home for cover as debris started flying everywhere.

“I got up and was hiding behind a recliner in the living room. What are you gonna do? You hear stuff moving, you’re gonna hit the floor,” said McWilliams.

Nearby, an Utz Food Distribution Center is missing walls and a delivery truck was knocked over. Utz usually opens around 6 a.m., so there was no one inside when the storm passed through.

“Thankfully no one was here and everybody is safe,” said Matt Smith, of Utz.

The storm also caused widespread damage across New Jersey and Pennsylvania, ripping a roof off an apartment building in Camden, New Jersey and uprooting trees.

The storm system that hit the area also decimated communities in the south over the weekend.

At least 10 tornadoes damaged or destroyed more than 100 homes in Mississippi and the severe weather is blamed for at least eight deaths.