After slowly forming stars for the first few billion years of their lives, the Magellanic Clouds, near neighbors of our own Milky Way galaxy, have upped their game and are now forming new stars at a fast clip. This new insight into the history of the Clouds comes from the first detailed chemical maps made of galaxies beyond the Milky Way. 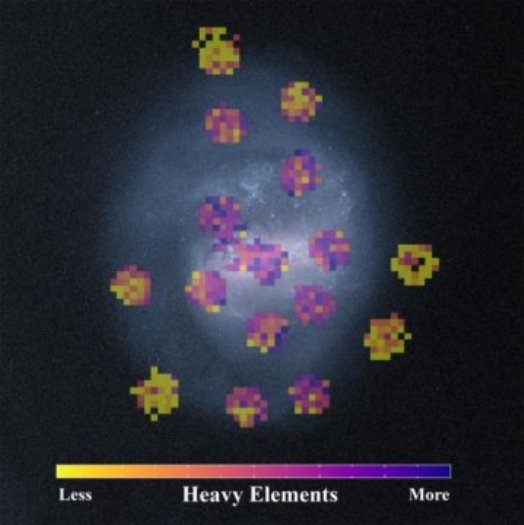 Named for explorer Ferdinand Magellan, who led the first European expedition to circumnavigate the globe, the Large and Small Magellanic Clouds are the Milky Way’s nearest galactic neighbors — companion galaxies that will someday merge with our galaxy. The two galaxies are visible only from the Southern Hemisphere, where they look like bright, wispy clouds.

A Map to Stellar History

Although humans have gazed at the Clouds for millennia, this is the first time astronomers have made a detailed map of the chemical compositions of the stars within them. The project, carried out by the Sloan Digital Sky Survey (SDSS), was led by NOAO astronomer David Nidever, who is also a research professor of physics at Montana State University.

“We mapped the positions, movements, and chemical make-up of thousands of stars in the Magellanic Clouds,” said Nidever. “Reading these maps helps us reconstruct the history of when these galaxies formed their stars.”

The maps are the first major discovery to come out of the new southern operations of SDSS’s Apache Point Observatory Galaxy Evolution Experiment 2 (APOGEE-2) survey, which is being carried out on the Irénée du Pont Telescope at Las Campanas Observatory in Chile.

To make the maps, the SDSS team collected spectra of as many stars as possible. Spectra, which spread out the light from a star in the form of a rainbow, encode the motions of stars, their temperature, the chemical elements they contain, and their stage in the stellar life cycle.

By measuring the chemical make-up of a galaxy’s stars, astronomers are able to infer their “star formation history,” a rough record of the rate at which stars formed over time. The reconstruction is possible because of the difference in the lifetimes of stars of different masses and the role more massive stars play in enriching galaxies with heavy elements.

As stars age, stars more massive than the Sun evolve and explode as supernovae, ejecting heavy elements out into the galaxy, while less massive stars live on. The ejected elements mix with the existing gas, enriching it. New generations of stars form from the enriched gas and inherit that chemical make-up. The process repeats, with the longer-lived lower mass stars surviving to record the enrichment history of the galaxy. By mapping the abundances of these stars, astronomers can “read” the star formation record of the galaxy.

Slow Start Followed by a Bang

Nidever thinks that the dramatic increase in the star formation rate is due to the interaction of the Magellanic Clouds with one another as they tumble toward the Milky Way. “The Clouds began their lives calmly in a relatively isolated part of the Universe, where there was no reason to form stars,” said Nidever. “But in the last few billion years, the close interactions that the Clouds have had with each other and with the Milky Way is causing the gas in the Clouds to transform into stars.”

Over the next several billion years, the Magellanic Clouds will continue to merge with the Milky Way, as the gravitational force of the much more massive Milky Way pulls them in. As the merger progresses, star formation in the Clouds is expected to reach an even greater, fevered pitch, according to recent work. In about 2.5 billion years, the Large Magellanic Cloud will be entirely consumed by the Milky Way in a cosmic explosion of star formation. Our nearest neighbors may have gotten off to a slow start, but exciting times lie ahead!