An assistant researcher professor with California State University has found evidence that the powerful quake that struck southern Californian back in 1812 may have been precipitated by a fault line other than the San Andreas. In his paper published in the journal Science Advances, Julian C. Lozos describes a computer model he created using real world data, what it showed, and why his findings suggest that a future double earthquake could occur someday in the area. 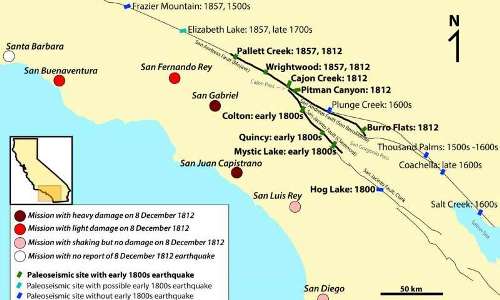 Back in 1812 a major earthquake struck southern California near what is now San Bernardino—modern study of damage from the quake suggested it was approximately a magnitude 7.5 quake. There was little damage because there were few structures in the area back then, though approximately 40 people were killed when a church they were in collapsed. For many years, Earth scientists have assumed that the quake was due solely to activity along the San Andreas Fault. In this new effort, Lozos suggests that the quake may have actually been set off by a quake along the San Jacinto fault line.

Lozos’ findings are part of a study that included field trips to several sites in an area where the San Andreas Fault and the San Jacinto Fault nearly merge. While there, he found evidence of three strands—where sections of fault are separated by bits of crust that has remained intact—one near the San Andreas fault and two near the San Jacinto fault. Each strand is evidence of an earthquake, but reports from people in the area suggest there were only two earthquakes during the time period under study—in 1812 and 1800, which suggested that one of the strands on the San Andreas Fault and one on the San Jacinto Fault were evidence of the same quake. Lozos also looked at other data collected by other researchers doing working on faults in the area—all of it went into a model he built to describe seismic activity in the area surrounding the time frame of the 1812 quake. The model showed that the most likely scenario that could account for the data that has been collected was that a quake had occurred along the San Jacinto fault line and as it made its way near the San Andreas fault line, the disruption caused a quake to occur along that fault line as well.

Lozos is quick to point out that his model is just that and that thus far he has no evidence to suggest that such a double quake is imminent, but he also notes that if it happened before, it could happen again, noting that southern California is long overdue for a pretty big tumbler.