Neutron stars — the compressed remains of massive stars gone supernova — are the densest “normal” objects in the known universe. (Black holes are technically denser, but far from normal.) Just a single sugar-cube worth of neutron-star material would weigh 100 million tons here on Earth, or about the same as the entire human population. Though astronomers and physicists have studied and marveled at these objects for decades, many mysteries remain about the nature of their interiors: Do crushed neutrons become “superfluid” and flow freely? Do they breakdown into a soup of subatomic quarks or other exotic particles? What is the tipping point when gravity wins out over matter and forms a black hole? 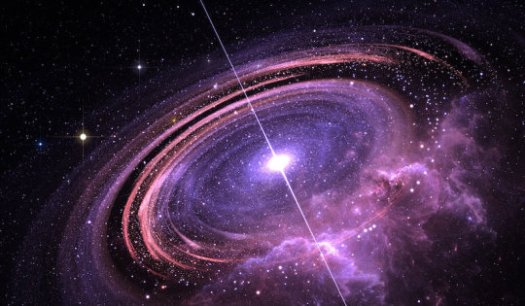 A team of astronomers using the National Science Foundation’s (NSF) Green Bank Telescope (GBT) has brought us closer to finding the answers.

The researchers, members of the NANOGrav Physics Frontiers Center, discovered that a rapidly rotating millisecond pulsar, called J0740+6620, is the most massive neutron star ever measured, packing 2.17 times the mass of our Sun into a sphere only 30 kilometers across. This measurement approaches the limits of how massive and compact a single object can become without crushing itself down into a black hole. Recent work involving gravitational waves observed from colliding neutron stars by LIGO suggests that 2.17 solar masses might be very near that limit.

“Neutron stars are as mysterious as they are fascinating,” said Thankful Cromartie, a graduate student at the University of Virginia and Grote Reber pre-doctoral fellow at the National Radio Astronomy Observatory in Charlottesville, Virginia. “These city-sized objects are essentially ginormous atomic nuclei. They are so massive that their interiors take on weird properties. Finding the maximum mass that physics and nature will allow can teach us a great deal about this otherwise inaccessible realm in astrophysics.”

Pulsars get their name because of the twin beams of radio waves they emit from their magnetic poles. These beams sweep across space in a lighthouse-like fashion. Some rotate hundreds of times each second. Since pulsars spin with such phenomenal speed and regularity, astronomers can use them as the cosmic equivalent of atomic clocks. Such precise timekeeping helps astronomers study the nature of spacetime, measure the masses of stellar objects, and improve their understanding of general relativity.

In the case of this binary system, which is nearly edge-on in relation to Earth, this cosmic precision provided a pathway for astronomers to calculate the mass of the two stars.

As the ticking pulsar passes behind its white dwarf companion, there is a subtle (on the order of 10 millionths of a second) delay in the arrival time of the signals. This phenomenon is known as “Shapiro Delay.” In essence, gravity from the white dwarf star slightly warps the space surrounding it, in accordance with Einstein’s general theory of relativity. This warping means the pulses from the rotating neutron star have to travel just a little bit farther as they wend their way around the distortions of spacetime caused by the white dwarf.

Cromartie is the principal author on a paper accepted for publication in Nature Astronomy. The GBT observations were research related to her doctoral thesis, which proposed observing this system at two special points in their mutual orbits to accurately calculate the mass of the neutron star.

“The orientation of this binary star system created a fantastic cosmic laboratory,” said Scott Ransom, an astronomer at NRAO and coauthor on the paper. “Neutron stars have this tipping point where their interior densities get so extreme that the force of gravity overwhelms even the ability of neutrons to resist further collapse. Each “most massive” neutron star we find brings us closer to identifying that tipping point and helping us to understand the physics of matter at these mindboggling densities.”

These observation were also part of a larger observing campaign known as NANOGrav, short for the North American Nanohertz Observatory for Gravitational Waves, which is a Physics Frontiers Center funded by the NSF.