Europe’s most active volcano, Mount Etna, is back in action, spewing smoldering rocks, ash, and molten lava onto its surroundings. 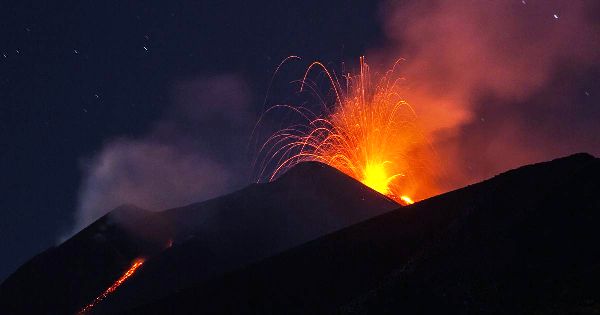 Mount Etna’s spectacular eruption was filmed on Saturday. Footage shows red hot lava pouring out of the mountain’s crater, with smoke and ash billowing into the atmosphere. The slopes of the fiery mountain are covered with hot and slowly cooling rock, giving it a hellish glow at night.

Mount Etna initially reawoke in late July, and fully resumed its fire-spewing activities this week. The lava kicked in late on Thursday, and the volcano showed a surge in seismic activity, Italy’s National Institute of Geophysics and Volcanology said. The tremor was followed by a flow of molten lava and a thick plume of ash.

In March, scientists found that Mount Etna is actually sliding into the Mediterranean Sea. Apart from the eruptions themselves, the shifting of an active volcano can potentially trigger disastrous landslides, and even tsunamis – which are not a very common occurrence in Europe, to put it mildly.