Researchers from the University of Oxford have traced the origin of a pre-historic eruption that blanketed the Mediterranean region in ash 29,000 years ago to Naples’ lesser-known volcano Campi Flegrei, located immediately to the west of the city. 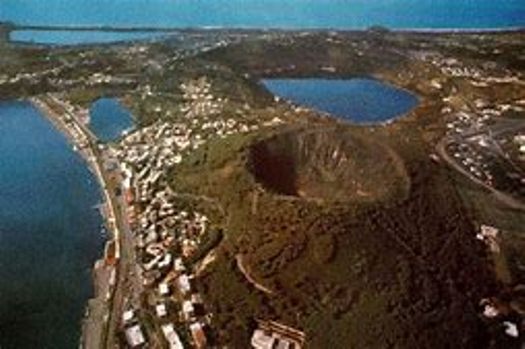 Since the late 1970s scientists have identified the same pre-historic volcanic ash layer in sediment cores extracted from sites ranging across 150,000 square kilometres of the central Mediterranean. This widespread ash layer, dated at 29,000 years ago, blanketed the region and clearly indicated a large volcanic eruption. Whilst the region is well known for its many active volcanoes, such as Mount Vesuvius which famously destroyed Pompeii in 79 AD, scientists had failed to confidently match this older, far-ranging ash deposit to a specific volcano or eruption.

The research, led by Dr Paul Albert, a Research Fellow in the School of Archaeology, has now identified an ash rich-eruption deposit within the city of Naples which was produced by Campi Flegrei volcano and has a chemical composition that matches the prehistoric ash layer traced across the Mediterranean region. The work was done in partnership with international researchers, including those from the National Institute of Geophysics and Volcanology (INGV), the National Research Council in Italy, the Laboratoire des Sciences du Climat et de l’Environnement in France, and the Berkeley Geochronology Centre in the USA.

“Part of the challenge of reliably attributing this major ash fall event to Campi Flegrei volcano has been that there is limited evidence for a large eruption close to the volcano,” says Albert. “This is in part because a more recent large-scale eruption of the volcano buried the Naples area in a thick ash deposit, largely destroying or concealing the evidence of this older event,” says Albert.

The team used a computer-based ash dispersal model to reconstruct the size of the eruption. “By linking the thickness of the ash deposits found in Naples, to those preserved in cores from across the central Mediterranean, the model was able to demonstrate and provide important constraints on the size of this large magnitude eruption,” says Albert.

The research, published today in the journal Geology, also highlights the importance of considering ash fall events preserved well away from the volcano when reconstructing the timing and scale of past explosive eruptions. “Ash fall preserved hundreds of kilometers away from the volcano has been critical here in the identification and reconstruction of this large eruption at Campi Flegrei,” says Albert.