NASA’s Aqua satellite peered into Hurricane Sergio with infrared light to determine if the storm was intensifying or weakening. Infrared data showed cloud top temperatures were getting warmer on the western half of the storm, indicating the uplift of air in storms had weakened. 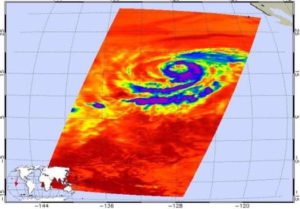 The Atmospheric Infrared Sounder or AIRS instrument aboard NASA’s Aqua satellite passed over Hurricane Sergio on Oct. 9 at 6:17 a.m. EDT (1017 UTC). AIRS uses infrared light and infrared light provides scientists with temperature data and that’s important when trying to understand how strong storms can be. The higher the cloud tops, the colder and the stronger they are. So infrared light as that gathered by the AIRS instrument can identify the strongest areas of a tropical cyclone.

Despite the slow weakening the hurricane still has a large but well-defined inner-core in the low and mid-levels.

NHC noted that there are no coastal watches or warnings in effect, but interests in Baja California Sur should monitor the progress of Sergio.