NASA’s first mission to provide unprecedented measurements of, and changes in, the temperature and composition of Earth’s upper atmosphere launched at 5:20 p.m. EST Thursday, Jan. 25, from the Guiana Space Centre in Kourou, French Guiana. 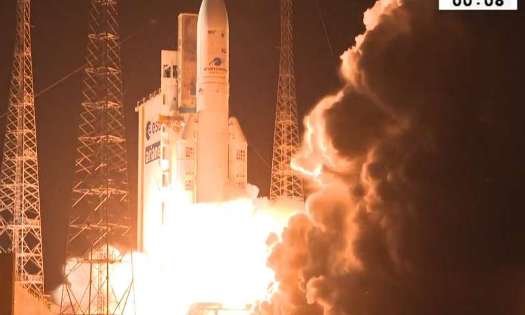 Global-scale Observations of the Limb and Disk, or GOLD, is also NASA’s first mission to fly as a hosted payload aboard a commercial satellite, and will reach its designated geostationary orbit, 22,000 miles above the Western Hemisphere, in summer 2018.

The instrument launched on an Arianespace Ariane 5 rocket and flies aboard SES-14, a communication satellite built by Airbus for Luxembourg-based satellite operator SES. Despite a launch anomaly, there is minimal impact on the SES-14 satellite. The satellite will reach geostationary orbit four weeks later than originally planned, but no impact on the quality of GOLD science is expected.

“This mission ushers in a new and innovative approach for NASA to do high-value science while maximizing commercial partnerships,” said Thomas Zurbuchen, associate administrator for NASA’s Science Mission Directorate in Washington. “As a result of this unique collaboration, observations of this vital region will help us better protect our space assets and improve forecasting models of space weather events that can impact our technological society.”

GOLD studies the little-understood region where Earth’s uppermost atmosphere meets the space that surrounds us—a critical boundary layer that responds both to terrestrial weather below and space weather above.

Understanding this region of space is crucial as it is increasingly part of the human domain—home not only to satellites and astronauts living and working aboard the International Space Station, but also the region where global positioning system and radio signals travel. Sudden changes there can have significant impacts here at Earth on the systems we’ve come to rely upon daily, including features available on our mobile devices such as GPS-dependent apps.

“Just as the first meteorological satellites revolutionized our ability to better understand and forecast terrestrial weather, GOLD will revolutionize how we understand space weather,” said Elsayed Talaat, the GOLD program scientist at NASA Headquarters in Washington.

GOLD will be able to scan the entire Western Hemisphere every 30 minutes, making this the first time we can track day-to-day changes in the upper atmosphere, rather than its long-term climate.

Approximately the size of a mini refrigerator, the 80-pound instrument is an imaging spectrograph—an instrument that breaks light down into its component wavelengths and measures their intensities. Similar to an infrared camera that allows you to see how temperatures change with different colors, GOLD will image ultraviolet light to provide a map of Earth that reveals how temperature and atmospheric composition change over the hemisphere. GOLD data will help scientists better understand the forces responsible for the day-to-day changes in this critical region.

“The upper atmosphere is far more variable than previously imagined, but we don’t understand the interactions between all factors,” said Richard Eastes, GOLD principal investigator at the University of Colorado’s Laboratory for Atmospheric and Space Physics, or LASP, in Boulder. “That’s where GOLD comes in. For decades, scientists, including myself, have dreamed of having the capabilities this mission provides.”

SES Government Solutions oversaw the integration of the payload on SES-14, procured the launch of the satellite with Arianespace, will facilitate command and control of the payload, and will deliver science data to LASP for initial processing and study. The mission is led by the University of Central Florida, or UCF, in Orlando.

“It has been a long journey of hard work and team spirit from GOLD’s conception to launch, but definitely worth it,” said UCF computer engineering professor Hassan Foroosh, who serves as the GOLD Science Data Center lead. “More fun will start soon when we get our first look at the data, and hopefully learn more about our planet in the years to come.”

GOLD is the newest in NASA’s fleet of heliophysics missions, which study a vast interconnected system—from the Sun to the space surrounding Earth and other planets, to the farthest limits of the Sun’s constantly flowing stream of solar wind. GOLD will provide key information about how Earth’s upper atmosphere is connected to this dynamic and complex system.

Also scheduled to launch this year is NASA’s Ionospheric Connection Explorer, or ICON, which will study the ionosphere and neutral upper atmosphere. ICON will fly just 350 miles above Earth, where it can gather close-up images of this region. Together, GOLD and ICON will provide the most comprehensive ionosphere observations gathered to date, enabling a deeper understanding of how our planet interacts with space.