In April 2015, Nepal — and especially the region around the capital city, Kathmandu — was struck by a powerful tremor. An earthquake with a magnitude of 7.8 destroyed entire villages, traffic routes and cultural monuments, with a death toll of some 9,000. 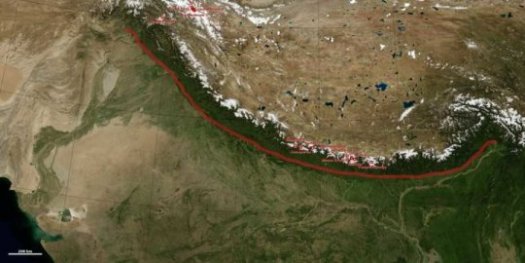 However, the country may still face the threat of much stronger earthquakes with a magnitude of 8 or more. This is the conclusion reached by a group of earth scientists from ETH Zurich based on a new model of the collision zone between the Indian and Eurasian Plates in the vicinity of the Himalayas.

Using this model, the team of ETH researchers working with doctoral student Luca Dal Zilio, from the group led by Professor Taras Gerya at the Institute of Geophysics, has now performed the first high-resolution simulations of earthquake cycles in a cross-section of the rupture zone.

“In the 2015 quake, there was only a partial rupture of the major Himalayan fault separating the two continental plates. The frontal, near-surface section of the rupture zone, where the Indian Plate subducts beneath the Eurasian Plate, did not slip and remains under stress,” explains Dal Zilio, lead author of the study, which was recently published in the journal Nature Communications.

Normally, a major earthquake releases almost all the stress that has built up in the vicinity of the focus as a result of displacement of the plates. “Our model shows that, although the Gorkha earthquake reduced the stress level in part of the rupture zone, tension actually increased in the frontal section close to the foot of the Himalayas. The apparent paradox is that ‘medium-sized’ earthquakes such as Gorkha can create the conditions for an even larger earthquake,” says Dal Zilio.

Tremors of the magnitude of the Gorkha earthquake release stress only in the deeper subsections of the fault system over lengths of 100 kilometres. In turn, new and even greater stress builds up in the near-surface sections of the rupture zone.

According to the simulations performed by Dal Zilio and his colleagues, two or three further Gorkha quakes would be needed to build up sufficient stress for an earthquake with a magnitude of 8.1 or more. In a quake of this kind, the rupture zone breaks over the entire depth range, extending up to the Earth’s surface and laterally — along the Himalayan arc — for hundreds of kilometres. This ultimately leads to a complete stress release in this segment of the fault system, which extends to some 2,000 kilometres in total.

Historical data shows that mega events of this kind have also occurred in the past. For example, the Assam earthquake in 1950 had a magnitude of 8.6, with the rupture zone breaking over a length of several hundred kilometres and across the entire depth range. In 1505, a giant earthquake struck with sufficient power to produce an approximately 800-kilometre rupture on the major Himalayan fault. “The new model reveals that powerful earthquakes in the Himalayas have not just one form but at least two, and that their cycles partially overlap,” says Edi Kissling, Professor of Seismology and Geodynamics. Super earthquakes might occur with a periodicity of 400 to 600 years, whereas “medium-sized” quakes such as Gorkha have a recurrence time of up to a few hundred years. As the cycles overlap, the researchers expect powerful and dangerous earthquakes to occur at irregular intervals.

However, they cannot predict when another extremely large quake will next take place. “No one can predict earthquakes, not even with the new model. However, we can improve our understanding of the seismic hazard in a specific area and take appropriate precautions,” says Kissling.

The two-dimensional and high-resolution model also includes some research findings that were published after the Gorkha earthquake. To generate the simulations, the researchers used the Euler mainframe computer at ETH Zurich. “A three-dimensional model would be more accurate and would also allow us to make statements about the western and eastern fringes of the Himalayas. However, modelling the entire 2,000 kilometres of the rupture zone would require enormous computational power,” says Dal Zilio.