Some of the most extreme outbursts observed in the universe are the mysterious jets of energy and matter beaming from the center of galaxies at nearly the speed of light. These narrow jets, which typically form in opposing pairs are believed to be associated with supermassive black holes and other exotic objects, though the mechanisms that drive and dissipate them are not well understood. 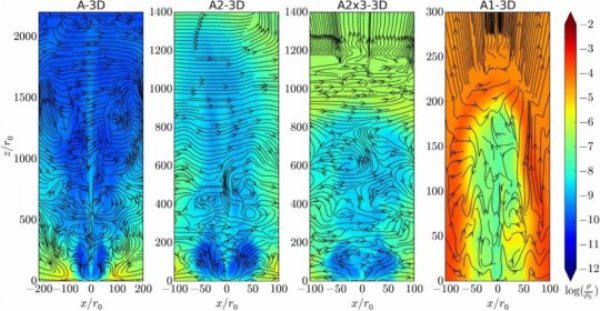 Now, a small team of researchers has developed theories supported by 3-D simulations to explain what’s at work.

“These jets are notoriously hard to explain,” said Alexander “Sasha” Tchekhovskoy, a former NASA Einstein fellow who co-led the new study as a member of the Nuclear Science Division at the Department of Energy’s Lawrence Berkeley National Laboratory (Berkeley Lab), and the Astronomy and Physics departments and Theoretical Astrophysics Center at UC Berkeley. “Why are they so stable in some galaxies and in others they just fall apart?”

As much as half of the jets’ energy can escape in the form of X-rays and stronger forms of radiation. The researchers showed how two different mechanisms — both related to the jets’ interaction with surrounding matter, known as the “ambient medium” — serve to reduce about half of the energy of these powerful jets.

“The exciting part of this research is that we are now coming to understand the full range of dissipation mechanisms that are working in the jet,” no matter the size or type of jet, he said.

The study that Tchekhovskoy co-led with Purdue University scientists Rodolfo Barniol Duran and Dimitrios Giannios is published in the Aug. 21 edition of Monthly Notices of the Royal Astronomical Society. The study concludes that the ambient medium itself has a lot to do with how the jets release energy.

“We were finally able to simulate jets that start from the black hole and propagate to very large distances — where they bump into the ambient medium,” said Duran, formerly a postdoctoral research associate at Purdue University who is now a faculty member at California State University, Sacramento.

Tchekhovskoy, who has studied these jets for over a decade, said that an effect known as magnetic kink stability, which causes a sudden bend in the direction of some jets, and another effect that triggers a series of shocks within other jets, appear to be the primary mechanisms for energy release. The density of the ambient medium that the jets encounter serves as the key trigger for each type of release mechanism.

“For a long time, we have speculated that shocks and instabilities trigger the spectacular light displays from jets. Now these ideas and models can be cast on a much firmer theoretical ground,” said Giannios, assistant professor of physics and astronomy at Purdue.

The length and intensity of the jets can illuminate the properties of their associated black holes, such as their age and size and whether they are actively “feeding” on surrounding matter. The longest jets extend for millions of light years into surrounding space.

“When we look at black holes, the first things we notice are the central streaks of these jets. You can make images of these streaks and measure their lengths, widths, and speeds to get information from the very center of the black hole,” Tchekhovskoy noted. “Black holes tend to eat in binges of tens and hundreds of millions of years. These jets are like the ‘burps’ of black holes — they are determined by the black holes’ diet and frequency of feeding.”

While nothing — not even light — can escape a black hole’s interior, the jets somehow manage to draw their energy from the black hole. The jets are driven by a sort of accounting trick, he explained, like writing a check for a negative amount and having money appear in your account. In the black hole’s case, it’s the laws of physics rather than a banking loophole that allow black holes to spew energy and matter even as they suck in surrounding matter.

The incredible friction and heating of gases spiraling in toward the black hole cause extreme temperatures and compression in magnetic fields, resulting in an energetic backlash and an outflow of radiation that escapes the black hole’s strong pull.

A tale of magnetic kinks and sequenced shocks

Earlier studies had shown how magnetic instabilities (kinks) in the jets can occur when jets run into the ambient medium. This instability is like a magnetic spring. If you squish the spring from both ends between your fingers, the spring will fly sideways out of your hand. Likewise, a jet experiencing this instability can change direction when it rams into matter outside of the black hole’s reach.

The same type of instability frustrated scientists working on early machines that attempted to create and harness a superhot, charged state of matter known as a plasma in efforts to develop fusion energy, which powers the sun. The space jets, also known as active galactic nuclei (AGN) jets, also are a form of plasma.

The latest study found that in cases where an earlier jet had “pre-drilled” a hole in the ambient medium surrounding a black hole and the matter impacted by the newly formed jet was less dense, a different process is at work in the form of “recollimation” shocks.

These shocks form as matter and energy in the jet bounce off the sides of the hole. The jet, while losing energy from every shock, immediately reforms a narrow column until its energy eventually dissipates to the point that the beam loses its tight focus and spills out into a broad area.

“With these shocks, the jet is like a phoenix. It comes out of the shock every time,” though with gradually lessening energy, Tchekhovskoy said. “This train of shocks cumulatively can dissipate quite a substantial amount of the total energy.”

The researchers designed the models to smash against different densities of matter in the ambient medium to create instabilities in the jets that mimic astrophysical observations.

Peering deeper into the source of jets

New, higher-resolution images of regions in space where supermassive black holes are believed to exist — from the Event Horizon Telescope (EHT), for example — should help to inform and improve models and theories explaining jet behavior, Tchekhovskoy said, and future studies could also include more complexity in the jet models, such as a longer sequence of shocks.

“It would be really interesting to include gravity into these models,” he said, “and to see the dynamics of buoyant cavities that the jet fills up with hot magnetized plasma as it drills a hole” in the ambient medium.

He added, “Seeing deeper into where the jets come from — we think the jets start at the black hole’s event horizon (a point of no return for matter entering the black hole) — would be really helpful to see in nature these ‘bounces’ in repeating shocks, for example. The EHT could resolve this structure and provide a nice test of our work.”