ESA’s Herschel mission releases today a series of unprecedented maps of star-forming hubs in the plane of our Milky Way galaxy. This is accompanied by a set of catalogs of hundreds of thousands of compact sources that span all phases leading to the birth of stars in our Galaxy. 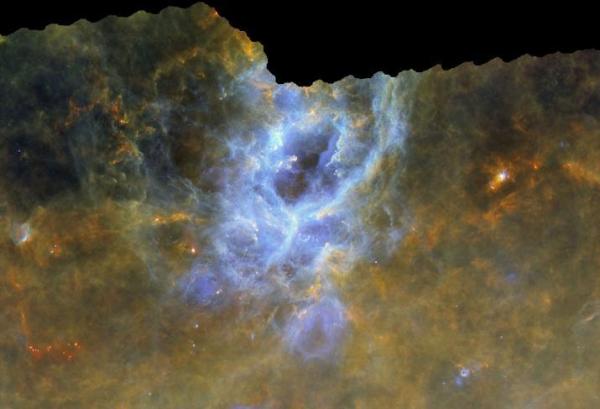 These maps and catalogs will be very valuable resources for astronomers, to exploit scientifically and for planning follow-up studies of particularly interesting regions in the Galactic Plane.

During its four years of operations (2009-2013), the Herschel space observatory scanned the sky at far-infrared and sub-millimeter wavelengths. Observations in this portion of the electromagnetic spectrum are sensitive to some of the coldest objects in the Universe, including cosmic dust, a minor but crucial component of the interstellar material from which stars are born.

The Herschel infrared Galactic Plane Survey (Hi-GAL) is the largest of all observing programs carried out with Herschel, in terms of both observing time – over 900 hours of total observations, equivalent to almost 40 days – and sky coverage – about 800 square degrees, or two percent of the entire sky. Its aim was to map the entire disc of the Milky Way, where most of its stars form and reside, in five of Herschel’s wavelength channels: 70, 160, 250, 350 and 500 μm.

Over the past two years, the Hi-GAL team has processed the data to obtain a series of calibrated maps of extraordinary quality and resolution. With a dynamical range of at least two orders of magnitude, these maps reveal the emission by diffuse material as well as huge filament structures and individual, point-like sources scattered across the images. 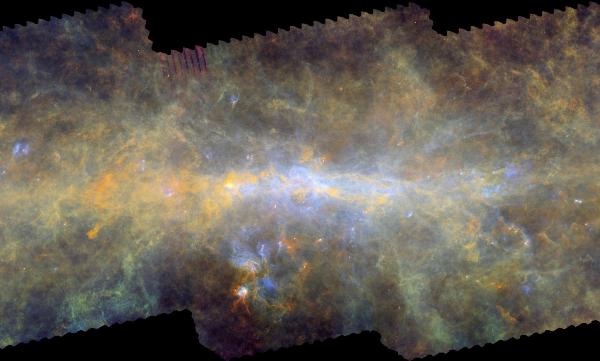 The images provide an unprecedented view of the Galactic Plane, ranging from diffuse interstellar material to denser filament structures of gas and dust that fragment into clumps where star formation sets in. They include pre-stellar clumps, proto-stars in various evolutionary stages and compact cores on the verge of turning into stars, as well as fully-fledged stars and the bubbles carved by their highly energetic radiation.

Today, the team releases the first part of this data set, consisting of 70 maps, each measuring two times two degrees, and provided in the five surveyed wavelengths. 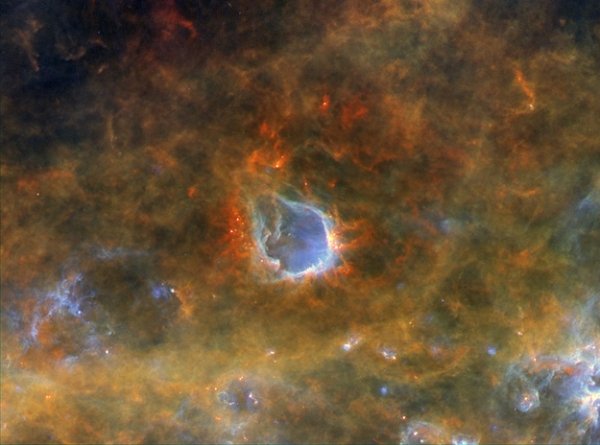 “These maps are not only stunning from an aesthetic point of view, but they represent a rich data set for astronomers to investigate the different phases of star formation in our Galaxy,” explains Sergio Molinari from IAPS/INAF, Italy, Principal Investigator for the Hi-GAL Project.

Astronomers have been able to avail of data from Hi-GAL from the very beginning of the observing program since the team agreed to waive their right to a proprietary period. The observations have been made available through the ESA Herschel Science Archive, including raw data as well as data products generated by systematic pipeline processing. The data has regularly been reprocessed to gradually higher quality and fidelity products. 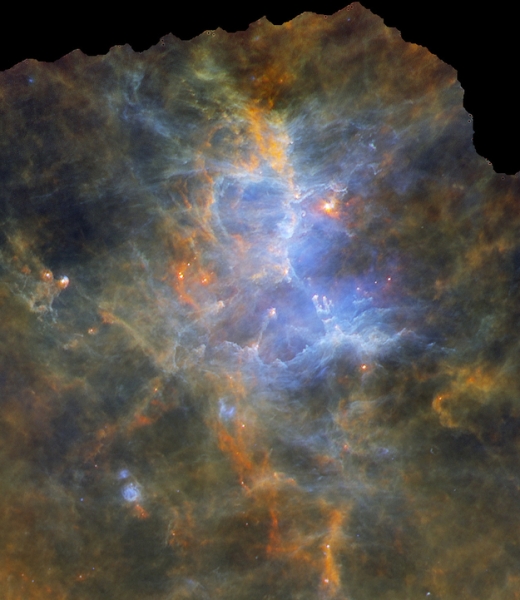 The present release represents an extra step in the data processing. The newly released maps are accompanied by source catalogs in each of the five bands, which can be directly used by the community to study a variety of subjects, including the distribution of diffuse dust and of star-forming regions across the Galactic Plane.

The maps cover the inner part of the Milky Way, towards the Galactic Center as seen from the Sun, with Galactic longitudes between +68° and -70°. A second release, with the remaining part of the survey, is foreseen for the end of 2016.

“It is not straightforward to extract compact sources from far-infrared images, where pre-stellar clumps and other proto-stellar objects are embedded in the diffuse interstellar medium that also shines brightly at the same wavelengths,” explains Molinari.

“For this reason, we developed a special technique to extract individual sources from the maps, maximising the contrast in order to amplify the compact objects with respect to the background.”

The result is a set of five catalogs, one for each of the surveyed wavelengths, listing the source position, flux, size, signal-to-noise ratio and other parameters related to their emission. The largest catalogue is the one compiled from the 160-μm maps, with over 300 000 sources.

“These will be an extremely useful resource for studies of star formation across the Milky Way, helping astronomers to delve into the Galactic Plane and also to identify targets for follow-up observations with other facilities.”