Researchers from diverse institutions, including the School of Land Surveying, Geodesy and Mapping Engineering from Universidad Politécnica de Madrid, have developed a new methodology to create easy-to-understand maps for decision-making support after large earthquakes. 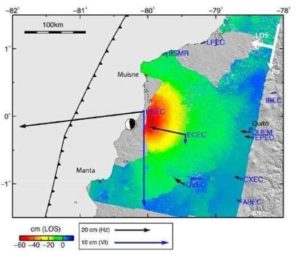 By using spatial geodesic techniques, such as the Global Navigation Satellite System (GNSS) and the Interferometric synthetic aperture radar, (InSAR), researchers have developed a methodology to estimate the activation of faults and volcanoes in a region after an earthquake. The results are presented in a traffic light scale in order to improve the transfer of the obtained scientific results after an earthquake to the management of this post-event.

This study has been led by researchers from Universidad Politécnica de Madrid (UPM), Complutense (UCM) and the Geological and Mining Institute of Spain (IGME) and published in the journal Remote Sensing.

The developed methodology was applied to the earthquake that occurred in April 2016 in Pedernales (Mw 7.8), and is based on the estimation of effort changes in nearby faults and volcanoes which are the consequences of the energy release after an earthquake. To do this, researchers combined, modeled and assessed geological data from catalogs of faults and volcanoes in the area; they also assessed data from the cosmic deformation caused by an earthquake and obtained with techniques of spatial geodesics: InSAR- Interferometric Synthetic Aperture Radar and Global Navigation Satellite System, GNSS.

From the results of this analysis, researchers developed a set of simplified maps represented with a traffic light scale to find out if an earthquake will be activated after a volcano. To quantify this estimation is a challenge to be developed in future research.

Although the techniques used for the analysis and modeling of data are widely used in the scientific field, the novelty of this study lies in the transfer of these results to the post-event management field. This methodology could also be adapted to pre-event management.