The moon, Earth’s closest neighbor, is among the strangest planetary bodies in the solar system. Its orbit lies unusually far away from Earth, with a surprisingly large orbital tilt. Planetary scientists have struggled to piece together a scenario that accounts for these and other related characteristics of the Earth-moon system. 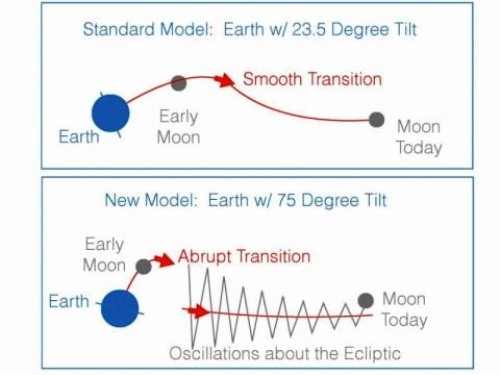 A new research paper, based on numerical models of the moon’s explosive formation and the evolution of the Earth-moon system, comes closer to tying up all the loose ends than any other previous explanation. The work, published in the October 31, 2016 Advance Online edition of the journal Nature, suggests that the impact that formed the moon also caused calamitous changes to Earth’s rotation and the tilt of its spin axis.

The research suggests that the impact sent Earth spinning much faster, and at a much steeper tilt, than it does today. In the several billion years since that impact, complex interactions between Earth, the moon and sun have smoothed out many of these changes, resulting in the Earth-moon system that we see today. In this scenario, the remaining anomalies in the moon’s orbit are relics of the Earth-moon system’s explosive past.

“Evidence suggests a giant impact blasted off a huge amount of material that formed the moon,” said Douglas Hamilton, professor of astronomy at the University of Maryland and a co-author of the Nature paper. “This material would have formed a ring of debris first, then the ring would have aggregated to form the moon. But this scenario does not quite work if Earth’s spin axis was tilted at the 23.5 degree angle we see today.”

But today, instead of being in line with the ecliptic plane, the moon’s orbit is tilted five degrees away from it.

“This large tilt is very unusual. Until now, there hasn’t been a good explanation,” Hamilton said. ” But we can understand it if Earth had a more dramatic early history than we previously suspected.”

Hamilton, with lead author Matija Cuk of the SETI institute and their colleagues Simon Lock of Harvard University and Sarah Stewart of the University of California, Davis, tried many different scenarios. But the most successful ones involved a moon-forming impact that sent Earth spinning extremely fast — as much as twice the rate predicted by other models. The impact also knocked Earth’s tilt way off, to somewhere between 60 and 80 degrees.

“We already suspected that Earth must have spun especially fast after the impact” Cuk said. “An early high tilt for Earth enables our planet to lose that excess spin more readily.”

The model also suggests that the newly-formed moon started off very close to Earth, but then drifted away — to nearly 15 times its initial distance. As it did so, the sun began to exert a more powerful influence over the moon’s orbit.

According to the researchers, both factors — a highly tilted, fast spinning Earth and an outwardly-migrating moon — contributed to establishing the moon’s current weird orbit. The newborn moon’s orbit most likely tracked Earth’s equator, tilted at a steep 60-80 degree angle that matched Earth’s tilt.

A key finding of the new research is that, if Earth was indeed tilted by more than 60 degrees after the moon formed, the moon could not transition smoothly from Earth’s equatorial plane to the ecliptic plane. Instead, the transition was abrupt and left the moon with a large tilt relative to the ecliptic — much larger than is observed today.

“As the moon moved outward, Earth’s steep tilt made for a more chaotic transition as the sun became a bigger influence,” Cuk said. “Subsequently, and over billions of years, the moon’s tilt slowly decayed down to the five degrees we see today. So today’s five degree tilt is a relic and a signature of a much steeper tilt in the past.”

Hamilton acknowledges that the model doesn’t answer all the remaining questions about the moon’s orbit. But the model’s strength, he says, is that it offers a framework for answering new questions in the future.

“There are many potential paths from the moon’s formation to the Earth-moon system we see today. We’ve identified a few of them, but there are sure to be other possibilities,” Hamilton said. “What we have now is a model that is more probable and works more cleanly than previous attempts. We think this is a significant improvement that gets us closer to what actually happened.”