Standard cosmology — that is, the Big Bang Theory with its early period of exponential growth known as inflation — is the prevailing scientific model for our universe, in which the entirety of space and time ballooned out from a very hot, very dense point into a homogeneous and ever-expanding vastness. This theory accounts for many of the physical phenomena we observe. But what if that’s not all there was to it? 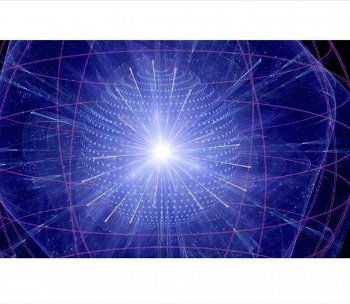 A new theory from physicists at the U.S. Department of Energy’s Brookhaven National Laboratory, Fermi National Accelerator Laboratory, and Stony Brook University, which will publish online on January 18 in Physical Review Letters, suggests a shorter secondary inflationary period that could account for the amount of dark matter estimated to exist throughout the cosmos.

“In general, a fundamental theory of nature can explain certain phenomena, but it may not always end up giving you the right amount of dark matter,” said Hooman Davoudiasl, group leader in the High-Energy Theory Group at Brookhaven National Laboratory and an author on the paper. “If you come up with too little dark matter, you can suggest another source, but having too much is a problem.”

Measuring the amount of dark matter in the universe is no easy task. It is dark after all, so it doesn’t interact in any significant way with ordinary matter. Nonetheless, gravitational effects of dark matter give scientists a good idea of how much of it is out there. The best estimates indicate that it makes up about a quarter of the mass-energy budget of the universe, while ordinary matter — which makes up the stars, our planet, and us — comprises just 5 percent. Dark matter is the dominant form of substance in the universe, which leads physicists to devise theories and experiments to explore its properties and understand how it originated.

Some theories that elegantly explain perplexing oddities in physics — for example, the inordinate weakness of gravity compared to other fundamental interactions such as the electromagnetic, strong nuclear, and weak nuclear forces — cannot be fully accepted because they predict more dark matter than empirical observations can support.

This new theory solves that problem. Davoudiasl and his colleagues add a step to the commonly accepted events at the inception of space and time.

In standard cosmology, the exponential expansion of the universe called cosmic inflation began perhaps as early as 10-35 seconds after the beginning of time — that’s a decimal point followed by 34 zeros before a 1. This explosive expansion of the entirety of space lasted mere fractions of a fraction of a second, eventually leading to a hot universe, followed by a cooling period that has continued until the present day. Then, when the universe was just seconds to minutes old — that is, cool enough — the formation of the lighter elements began. Between those milestones, there may have been other inflationary interludes, said Davoudiasl.

“They wouldn’t have been as grand or as violent as the initial one, but they could account for a dilution of dark matter,” he said.

In the beginning, when temperatures soared past billions of degrees in a relatively small volume of space, dark matter particles could run into each other and annihilate upon contact, transferring their energy into standard constituents of matter-particles like electrons and quarks. But as the universe continued to expand and cool, dark matter particles encountered one another far less often, and the annihilation rate couldn’t keep up with the expansion rate.

“It’s definitely not the standard cosmology, but you have to accept that the universe may not be governed by things in the standard way that we thought,” he said. “But we didn’t need to construct something complicated. We show how a simple model can achieve this short amount of inflation in the early universe and account for the amount of dark matter we believe is out there.”

Proving the theory is another thing entirely. Davoudiasl said there may be a way to look for at least the very feeblest of interactions between the hidden sector and ordinary matter.

“If this secondary inflationary period happened, it could be characterized by energies within the reach of experiments at accelerators such as the Relativistic Heavy Ion Collider (RHIC) and the Large Hadron Collider,” he said. Only time will tell if signs of a hidden sector show up in collisions within these colliders, or in other experimental facilities.