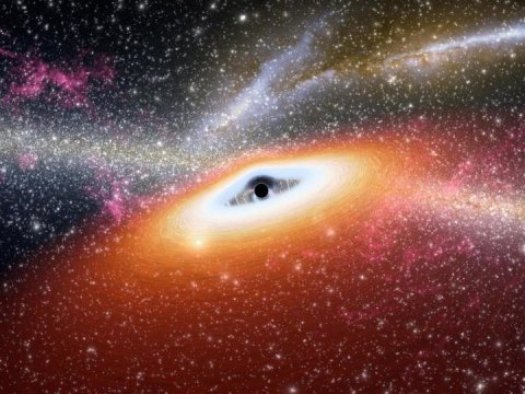 A new Tel Aviv University-led study published today in Nature Astronomy finds that some supermassive black holes are triggered to grow, suddenly devouring a large amount of gas in their surroundings.

In February 2017, the All Sky Automated Survey for Supernovae discovered an event known as AT 2017bgt. This event was initially believed to be a “star swallowing” event, or a “tidal disruption” event, because the radiation emitted around the black hole grew more than 50 times brighter than what had been observed in 2004.

However, after extensive observations using a multitude of telescopes, a team of researchers led by Dr. Benny Trakhtenbrot and Dr. Iair Arcavi, both of TAU’s Raymond & Beverly Sackler School of Physics and Astronomy, concluded that AT 2017bgt represented a new way of “feeding” black holes.

Dr. Arcavi, who led the data collection, adds, “We followed this event for more than a year with telescopes on Earth and in space, and what we saw did not match anything we had seen before.”

The observations matched the theoretical predictions of another member of the research team, Prof. Hagai Netzer, also of Tel Aviv University.

“We had predicted back in the 1980s that a black hole swallowing gas from its surroundings could produce the elements of light seen here,” says Prof. Netzer. “This new result is the first time the process was seen in practice.”

Astronomers from the U.S., Chile, Poland and the U.K. took part in the observations and analysis effort, which used three different space telescopes, including the new NICER telescope installed on board the International Space Station.

One of the ultraviolet images obtained during the data acquisition frenzy turned out to be the millionth image taken by the Neil Gehrels Swift Observatory — an event celebrated by NASA, which operates this space mission.

The research team identified two additional recently reported events of black holes “switched on,” which share the same emission properties as AT 2017bgt. These three events form a new and tantalizing class of black hole re-activation.

“We are not yet sure about the cause of this dramatic and sudden enhancement in the black holes’ feeding rate,” concludes Dr. Trakhtenbrot. “There are many known ways to speed up the growth of giant black holes, but they typically happen during much longer timescales.”

“We hope to detect many more such events, and to follow them with several telescopes working in tandem,” says Dr. Arcavi. “This is the only way to complete our picture of black hole growth, to understand what speeds it up, and perhaps finally solve the mystery of how these giant monsters form.”