An international team led by researchers from the Instituto de Astrofísica de Canarias (IAC) and the University of La Laguna (ULL) has discovered one of the brightest “non-active” galaxies in the early universe. Finding BG1429+1202 was made possible by the “help” of a massive elliptical galaxy along the line of sight to the object, which acted as a kind of lens, amplifying the brightness and distorting the observed image. The results, published in Astrophysical Journal Letters, are part of the BELLS GALLERY project, based on the analysis of one and a half million spectra of galaxies from the Sloan Digital Sky Survey (SDSS). 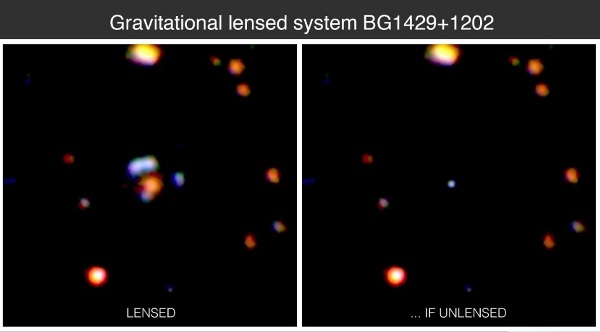 The phenomenon of gravitational lensing, predicted by Einstein’s General Theory of Relativity, is produced when light is deflected as it passes by a very massive object. For a distant observer the mass of the elliptical galaxy acts on the light as if it were a huge lens, producing a much brighter image of the source, BG1429+1202, allowing us to see details which would otherwise be too faint to detect.

“This is one of the few known cases of galaxies”, says Rui Marques Chaves, a doctoral student at the IAC-ULL and first author of the article, “with a very high apparent brightness and also an intrinsically high luminosity. The observations allowed us to determine its key properties in a very short time”. To study this system, two telescopes at the Observatorio del Roque de los Muchachos (Garafía, La Palma) were used: the Gran Telescopio CANARIAS (GTC) and the William Herschel Telescope (WHT), of the Isaac Newton Group of Telescopes (ING). The system is formed of a massive elliptical galaxy at a distance of 5,400 million light years, and behind it is BG1429+1202, which emits Lyman alpha radiation, 11,400 million light years away from us (we see it as it was only some 2,300 million years after the Big Bang). The lensing galaxy produces four distinct images of the distant galaxy, with a flux which is nine times bigger than it would be without this natural lens lying along the line of sight.

An exceptional characteristic of BG1429+1202 is its very high luminosity in the Lyman alpha emission line, one of the brightest in the ultraviolet range, because other similar cases of lensed galaxies do not show such strong emission in this line. Although the gravitational lensing effect has been used in many research projects, the method of selecting distant Lyman-alpha emitting galaxies has been used for the first time in the BELLS GALLERY project. “We analyzed around a million and a half spectra of galaxies”, adds Yiping Shu, an astronomer at the National Astronomical Observatories (NAOC), in Beijing (China) and first author of earlier publications from the same project. “They were obtained with the Sloan Telescope, at the Apache Point Observatory in New Mexico (USA), and we have detected emission in Lyma-alpha from galaxies much further away than their lenses in 187 cases, of which we have gone on to observe 21 with the Hubble Space Telescope. Those observations confirm that the majority of these objects are gravitationally lensed”.

The increase in apparent brightness (the brightness observed from Earth) of distant galaxies which is produced by gravitational lenses allows us to obtain data of improved quality. “With telescopes such as the GTC and the WHT”, explains Ismael Pérez Fournon, a researcher at the IAC-ULL and coordinator of this article, “We can carry out studies which would be impossible without the presence of the lenses. In practice it is as if we were observing already with one of the future giant telescopes, such as the Extremely Large European Telescope (E-ELT) of 39 m or the Thirty Meter Telescope (TMT).” “BG1429+1202 is so bright that it can even be seen on the photographic images of the Digital Sky Survey”, adds Paloma Matínez Navajas, a researcher at the IAC and another of the authors of the study.

In spite of the numerous previous studies of gravitational lenses based on images and spectra from the Sloan Digital Sky Survey, BG1429+1202 had not been noticed until this work. “Discoveries like BG1429+1202 demonstrate the way in which big astronomical data sets from large surveys can be mined for new astrophysical applications. At the National Optical Astronomy Observatory (NOAO, in Tucson, Arizona USA), we are deploying open-access capabilities to support these kinds of survey-scale archival research projects using public wide-field imaging data from the Dark Energy Camera and other instruments, as well as future data sets from projects such as the Dark Energy Spectroscopic Instrument (DESI), concludes Adam Bolton, Associate Director of the NOAO and an author on this paper.