A team of astronomers in the UK, USA and Australia have found a planet, until now thought to be a free floating or lonely planet, in a huge orbit around its star. Incredibly the object, designated as 2MASS J2126, is about 1 trillion (1 million million) kilometres from the star, or about 7000 times the distance from the Earth to the Sun. The researchers report the discovery in a paper in Monthly Notices of the Royal Astronomical Society. 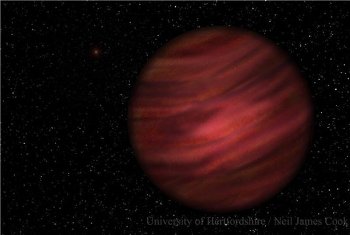 In the last five years a number of free floating planets have been found. These are gas giant worlds like Jupiter that lack the mass for the nuclear reactions that make stars shine, so cool and fade over time. Measuring the temperatures of these objects is relatively straightforward, but it depends on both mass and age. This means astronomers need to find out how old they are, before they can find out if they are lightweight enough to be planets or if they are heavier ‘failed stars’ known as brown dwarfs.

US-based researchers found 2MASS J2126 in an infrared sky survey, flagging it as a possible young and hence low mass object. In 2014 Canadian researchers identified 2MASS J2126 as a possible member of a 45 million year old group of stars and brown dwarfs known as the Tucana Horologium Association. This made it young and low enough in mass to be classified as a free-floating planet.

Lead author Dr Niall Deacon of the University of Hertfordshire has spent the last few years searching for young stars with companions in wide orbits. As part of the work, his team looked through lists of known young stars, brown dwarfs and free-floating planets to see if any of them could be related. They found that TYC 9486-927-1 and 2MASS J2126 are moving through space together and are both about 104 light years from the Sun, implying that they are associated.

“This is the widest planet system found so far and both the members of it have been known for eight years,” said Dr Deacon, “but nobody had made the link between the objects before. The planet is not quite as lonely as we first thought, but it’s certainly in a very long distance relationship.”

When they looked in more detail, the team were not able to confirm that TYC 9486-927-1 and 2MASS J2126 are members of any known group of young stars.

“Membership in a group of young stars is great for establishing an age,” said study co-author Josh Schlieder of the NASA Ames Research Center, “but when we can’t use that we need to resort to other methods.”

Based on this age the team was able to estimate the mass of 2MASS J2126, finding it to be between 11.6 to 15 times the mass of Jupiter. This placed it on the boundary between planets and brown dwarfs. It means that 2MASS J2126 has a similar mass, age and temperature to one of the first planets directly imaged around another star, beta Pictoris b.

“Compared to beta Pictoris b, 2MASS J2126 is more than 700 times further away from its host star,” said Dr Simon Murphy of the Australian National University, also a study co-author, “but how such a wide planetary system forms and survives remains an open question.”

2MASS J2126 is around 7000 Earth-Sun distances or 1 trillion kilometres away from its parent star, giving it the widest orbit of any planet found around another star. At such an enormous distance it takes roughly 900,000 years to complete one orbit, meaning it has completed less than fifty orbits over its lifetime. There is little prospect of any life on an exotic world like this, but any inhabitants would see their ‘Sun’ as no more than a bright star, and might not even imagine they were connected to it at all.