A geomagnetic excursion, like a geomagnetic reversal, is a significant change in the Earth’s magnetic field. However, excursions are not strong enough to permanently change the large-scale orientation of the field, but rather hopscotch back and forth northern latitudes. They are usually short-lived decreasing in field intensity, with a variation in pole orientation of up to 45 degrees from the previous position. These events often involve declines in field strength to between 5% and 20% of normal. 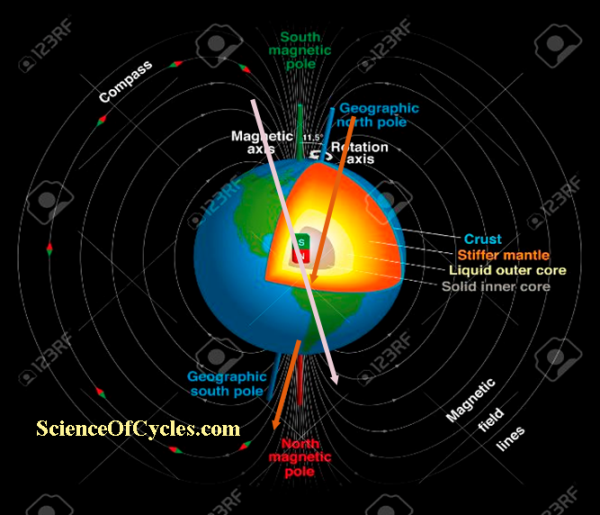 Excursions, unlike reversals, are generally not recorded across the entire globe. This is partially due to them not being recorded well within the sedimentary record, but also because they likely do not extend through the entire geomagnetic field. One of the first excursions to be studied was the Laschamp event, dated at around 40,000 years ago. Since this event has also been seen in sites across the globe, it is suggested as one of the few examples of a truly global excursion.

Excursions are less likely to leave evidence that is identifiable in geological records – they can easily be too small to be noticed. Consequently scientists are unsure how frequently they occur. So far 12 have been documented as occurring in the last 780,000 years, which means they happen (on average) at least every 65,000 years. 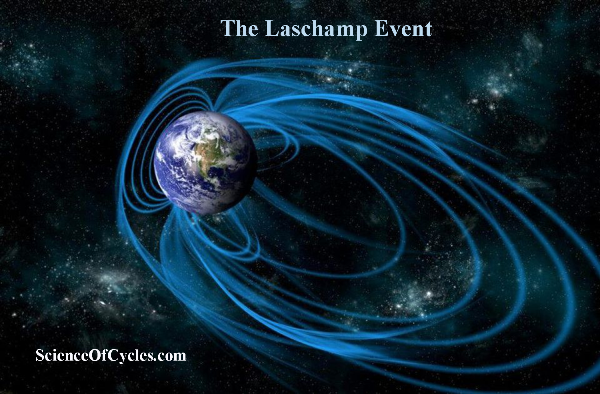 The Laschamp event was a short reversal of the Earth’s magnetic field. It occurred 41,400 (±2,000) years ago during the last ice age and was first recognized in the late 1960s as a geomagnetic reversal recorded in the Laschamp lava flows in the Clermont-Ferrand district of France. The magnetic excursion has since been demonstrated in geological archives from many parts of the world. 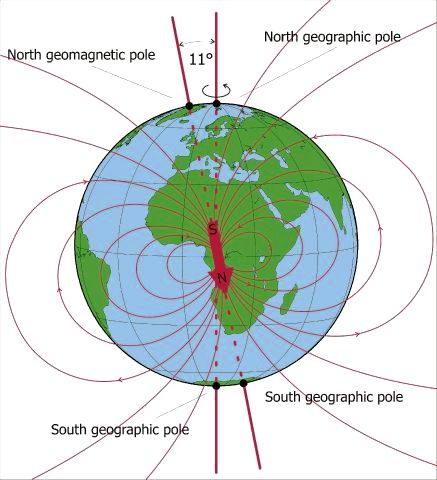 The period of reversed magnetic field was approximately 440 years, with the transition from the normal field lasting approximately 250 years. The reversed field was 75% weaker, whereas the strength dropped to only 5% of the current strength during the transition. This reduction in geomagnetic field strength resulted in more cosmic rays reaching the Earth, causing greater production of the cosmogenic isotopes beryllium 10 and carbon 14. The Laschamp event was the first known geomagnetic excursion and remains the most thoroughly studied among the known geomagnetic excursions.

Coming Next: Part IV – How Geomagnetic Expansion or Contraction Effects Animals and Humans