Neutrinos and antineutrinos, sometimes called ghost particles because difficult to detect, can transform from one type to another. The international T2K Collaboration announces a first indication that the dominance of matter over antimatter may originate from the fact that neutrinos and antineutrinos behave differently during those oscillations. This is an important milestone towards the understanding of our Universe. A team of particle physicists from the University of Bern provided important contributions to the experiment. 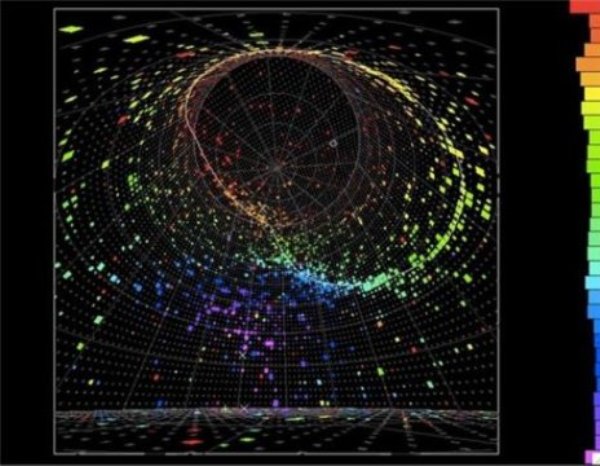 The Universe is primarily made of matter and the apparent lack of antimatter is one of the most intriguing questions of today’s science. The T2K collaboration, with participation of the group of the University of Bern, announced today in a colloquium held at the High Energy Accelerator Research Organization (KEK) in Tsukuba, Japan, that it found indication that the symmetry between matter and antimatter (so called “CP-Symmetry”) is violated for neutrinos with 95% probability.

Different Transformation of Neutrinos and Antineutrinos

Neutrinos are elementary particles which travel through matter almost without interaction. They appear in three different types: electron- muon- and tau-neutrinos and their respective antiparticle (antineutrinos). In 2013 T2K discovered a new type of transformation among neutrinos, showing that muon-neutrinos transform (oscillate) into electron-neutrinos while travelling in space and time. The outcome of the latest T2K study rejects with 95% probability the hypothesis that the analogous transformation from muon-antineutrinos to electron-antineutrinos takes place with identical chance. This is a first indication that the symmetry between matter and antimatter is violated in neutrino oscillations and therefore neutrinos also play a role in the creation of the matter-antimatter asymmetry in the universe.

“This result is among the most important findings in neutrino physics over the last years,” said Prof. Antonio Ereditato, director of the Laboratory of High Energy Physics of the University of Bern and leader of the Bern T2K group, “and it is opening the way to even more exciting achievements, pointing to the existence of a tiny but measurable effect.” Ereditato added: “Nature seems to indicate that neutrinos can be responsible for the observed supremacy of matter over antimatter in the Universe. What we measured justifies our current efforts in preparing the next scientific enterprise, DUNE, the ultimate neutrino detector in USA, which should allow reaching a definitive discovery.”

In the T2K experiment a muon-neutrino beam is produced at the Proton Accelerator Research Complex (J-PARC) in Tokai on the east coast of Japan and is detected 295 kilometres away by the gigantic Super-Kamiokande underground detector (“T2K” stands for “Tokai to Kamiokande”). The neutrino beam needs to be fully characterized immediately after production, that means before neutrinos start to oscillate. For this purpose, the ND280 detector was built and installed close to the neutrino departing point.

Researchers from the University of Bern, together with colleagues from Geneva and ETH Zurich, and other international institutions, contributed to the design, realization and operation of ND280. The group of Bern, in particular, took care of the large magnet surrounding the detector and built and operated the so-called muon monitor, a device needed to measure the intensity and the energy spectrum of the muon particles produced together with neutrinos. The Bern group is currently very active in determining the probability of interaction of neutrinos with the ND280 apparatus: an important ingredient to reach high-precision measurements such as the one reported here.