Astronomers like to say we are the byproducts of stars, stellar furnaces that long ago fused hydrogen and helium into the elements needed for life through the process of stellar nucleosynthesis. 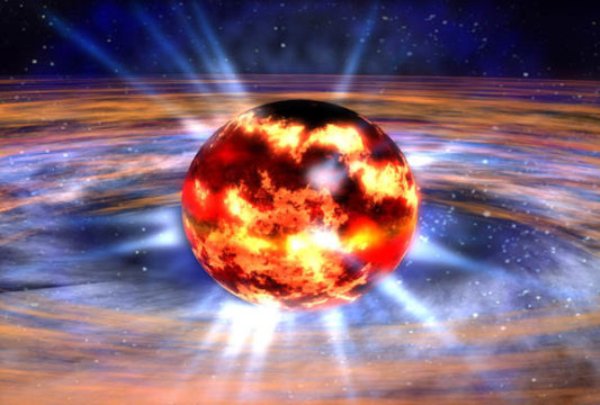 As the late Carl Sagan once put it: “The nitrogen in our DNA, the calcium in our teeth, the iron in our blood, the carbon in our apple pies were made in the interiors of collapsing stars. We are made of star stuff.”

But what about the heavier elements in the periodic chart, elements such as gold, platinum and uranium?

Astronomers believe most of these “r-process elements” — elements much heavier than iron — were created, either in the aftermath of the collapse of massive stars and the associated supernova explosions, or in the merging of binary neutron star systems.

“A different kind of furnace was needed to forge gold, platinum, uranium and most other elements heavier than iron,” explained George Fuller, a theoretical astrophysicist and professor of physics who directs UC San Diego’s Center for Astrophysics and Space Sciences. “These elements most likely formed in an environment rich with neutrons.”

In a paper published August 7 in the journal Physical Review Letters, he and two other theoretical astrophysicists at UCLA — Alex Kusenko and Volodymyr Takhistov — offer another means by which stars could have produced these heavy elements: tiny black holes that came into contact with and are captured by neutron stars, and then destroy them.

Neutron stars are the smallest and densest stars known to exist, so dense that a spoonful of their surface has an equivalent mass of three billion tons.

Tiny black holes are more speculative, but many astronomers believe they could be a byproduct of the Big Bang and that they could now make up some fraction of the “dark matter” — the unseen, nearly non-interacting stuff that observations reveal exists in the universe.

If these tiny black holes follow the distribution of dark matter in space and co-exist with neutron stars, Fuller and his colleagues contend in their paper that some interesting physics would occur.

They calculate that, in rare instances, a neutron star will capture such a black hole and then devoured from the inside out by it. This violent process can lead to the ejection of some of the dense neutron star matter into space.

“Small black holes produced in the Big Bang can invade a neutron star and eat it from the inside,” Fuller explained. “In the last milliseconds of the neutron star’s demise, the amount of ejected neutron-rich material is sufficient to explain the observed abundances of heavy elements.”

“As the neutron stars are devoured,” he added, “they spin up and eject cold neutron matter, which decompresses, heats up and make these elements.”

This process of creating the periodic table’s heaviest elements would also provide explanations for a number of other unresolved puzzles in the universe and within our own Milky Way galaxy.

In addition, the scientists calculated that ejection of nuclear matter from the tiny black holes devouring neutron stars would produce three other unexplained phenomenon observed by astronomers.

“They are a distinctive display of infrared light (sometimes termed a “kilonova”), a radio emission that may explain the mysterious Fast Radio Bursts from unknown sources deep in the cosmos, and the positrons detected in the galactic center by X-ray observations,” said Fuller. “Each of these represent long-standing mysteries. It is indeed surprising that the solutions of these seemingly unrelated phenomena may be connected with the violent end of neutron stars at the hands of tiny black holes.”

Funding for this project was provided by the National Science Foundation (PHY-1614864) at UC San Diego and by the U.S. Department of Energy (DE-SC0009937) at UCLA. Alex Kusenko was also supported, in part, by the World Premier International Research Center Initiative (WPI), MEXT, Japan.