Some of the biggest galaxies in the universe are full of extinguished stars. But nearly 12 billion years ago, soon after the universe first was created, these massive galaxies were hotspots that brewed up stars by the billions.
How these types of cosmic realms, called dusty starburst galaxies, became galactic dead zones is an enduring mystery. 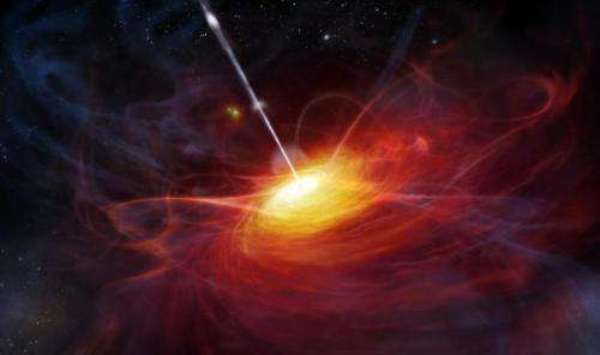 Astronomers at the University of Iowa, in a new study published in the Astrophysical Journal, offer a clue. They say quasars, powerful energy sources believed to dwell at the heart of galaxies, may be responsible for why some dusty starburst galaxies ceased making stars.

The study could help explain how galaxies evolve from star makers to cosmic cemeteries and how various phenomena scientists know little about—quasars and supermassive black holes that are believed to exist deep within all galaxies, for example—may propel those changes.

The scientists arrived at their theory after locating quasars inside four dusty starburst galaxies that still are creating stars.

“These quasars may play an important role in making the dusty starbursts extinct in the cosmic history,” says Hai Fu, assistant professor in the UI’s Department of Physics and Astronomy and the paper’s first author. “This is because quasars are energetic enough to eject gas out of the galaxy, and gas is the fuel for star formation, so quasars provide a viable mechanism to explain the transition between a starburst and an extinct elliptical (galaxy).”

Quasars shouldn’t be detectable in dusty starburst galaxies because their light would be absorbed, or blocked, by the grit churned up by the intense star-forming activity taking place there, Fu says.

“So, the fact that we saw any such quasars implies that there must be more quasars hidden in dusty starbursts,” Fu says. “To push this to the extreme, maybe every dusty starburst galaxy hosts a quasar and we just cannot see the quasars.”

Fu and his team located the quasars in March 2016 with the Atacama Large Millimeter/submillimeter Array (ALMA), a bank of radio telescopes located more than 16,000 feet above sea level in northern Chile. It was the first time Fu’s team reserved time on ALMA, brought into full operation in 2013 and funded by international partners, including the U.S. National Science Foundation.

The scientists then mapped the quasars with other telescopes and at wavelengths ranging from ultraviolet to far infrared. Based on these observations, they confirmed the quasars are the same as those located with ALMA. The question then became: Why are these quasars visible when they should be enshrouded?

The researchers have a theory. They think the quasars are peeking out from deep holes in each galaxy, a debris-less vacuum that allows light to escape amid the cloudy surroundings. The specific shape of these galaxies is unclear because even ALMA isn’t powerful enough to provide a clear look at regions of the cosmos where light being detected was emitted 12 billion years ago, when the universe was roughly one-seventh its current age. But the team imagines the galaxies may be doughnut shaped and oriented in such a way that their holes (and, thus, the quasar) can be seen.

“It’s a rare case of geometry lining up,” says Jacob Isbell, a UI senior from Garrison, Iowa, majoring in physics and astronomy and the paper’s second author. “And that hole happens to be aligned with our line of sight.”
The scientists now think most quasars inside dusty starburst galaxies can’t be seen because they’re oriented in a way that keeps them hidden. But finding four examples of dusty starburst galaxies with viewable quasars does not seem random; in fact, it suggests more exist.

The paper is titled, “The circumgalactic medium of submillimeter galaxies. II. Unobscured QSOS within dusty starbursts and QSO sightlines with impact parameters below 100 kiloparsec.”