Caltech applied physicists have experimentally simulated the Sun’s magnetic fields to create a realistic coronal loop in a lab. 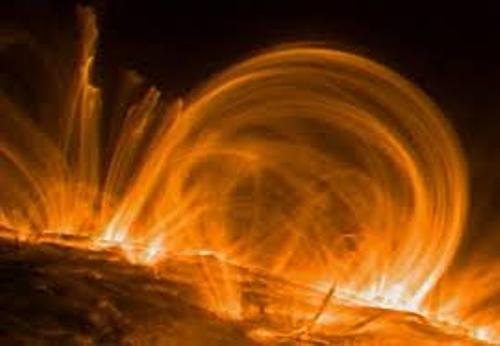 Coronal loops are arches of plasma that erupt from the surface of the Sun following along magnetic field lines. Because plasma is an ionized gas—that is, a gas of free-flowing electrons and ions—it is an excellent conductor of electricity. As such, solar corona loops are guided and shaped by the Sun’s magnetic field.

The Earth’s magnetic field acts as a shield that protects humans from the strong X-rays and energized particles emitted by the eruptions, but communications satellites orbit outside this shield field and therefore remain vulnerable. In March 1989, a particularly large flare unleashed a blast of charged particles that temporarily knocked out one of the National Oceanic and Atmospheric Administration’s geostationary operational environmental satellites that monitor the earth’s weather; caused a sensor problem on the space shuttle Discovery; and tripped circuit breakers on Hydro-Québec’s power grid, which caused a major blackout in the province of Quebec, Canada, for nine hours.

“This potential for causing havoc—which only increases the more humanity relies on satellites for communications, weather forecasting, and keeping track of resources—makes understanding how these solar events work critically important,” says Paul Bellan, professor of applied physics in the Division of Engineering and Applied Science.

Although simulated coronal loops have been created in labs before, this latest attempt incorporated a magnetic strapping field that binds the loop to the Sun’s surface. Think of a strapping field like the metal hoops on the outside of a wooden barrel. While the slats of the barrel are continually under pressure pushing outward, the metal hoops sit perpendicularly to the slats and hold the barrel together.

The strength of this strapping field diminishes with distance from the Sun. This means that when close to the solar surface, the loops are clamped down tightly by the strapping field but then can break loose and blast away if they rise to a certain altitude where the strapping field is weaker. These eruptions are known as solar flares and coronal mass ejections (CMEs).

CMEs are rope-like discharges of hot plasma that accelerate away from the Sun’s surface at speeds of more than a million miles per hour. These eruptions are capable of releasing energy equivalent to 1 billion megatons of TNT, making them potentially the most powerful explosions in the solar system. (CMEs are not to be confused with solar flares, which often occur as part of the same event. Solar flares are bursts of light and energy, while CMEs are blasts of particles embedded in a magnetic field.)

The simulated loops and strapping fields provide new insight into how energy is stored in the solar corona and then released suddenly. Bellan worked with Caltech graduate student Bao Ha (MS ’10, PhD ’16) to create the strapping field and coronal loop. The results of their experiments were published in the journal Geophysical Research Letters on September 17, 2016.

Bellan and his colleagues have been working on laboratory-scale simulations of solar corona phenomena for two decades. In the lab, the team generates ropes of plasma in a 1.5-meter-long vacuum chamber.

“Studying coronal mass ejections is challenging, since humans do not know how and when the Sun will erupt. But laboratory experiments permit the control of eruption parameters and enable the systematic explorations of eruption dynamics,” says Ha, lead author of the GRL paper. “While experiments with the same eruption parameters are easily reproducible, the loop dynamics vary depending on the configuration of the strapping magnetic field.”

Simulating a strapping field with strength that fades over the relatively short length of the vacuum chamber proved difficult, Bellan says. In order to make it work, Ha and Bellan had to engineer electromagnetic coils that produce the strapping field inside the chamber itself.

After more than three years of design, fabrication, and testing, Bellan and Ha were able to create a strapping field that peaks in strength about 10 centimeters away from where the plasma loop forms, then dies off a short distance farther down the vacuum chamber.

The arrangement allows Bellan and Ha to watch the plasma loop slowly grow in size, then reach a critical point and fire off to the far end of the chamber.

Next, Bellan plans to measure the magnetic field inside the erupting loop and also study the waves that are emitted when plasmas break apart.