Rescuers began a block-by-block search of tens of thousands of Houston homes Thursday, pounding on doors and shouting as they looked for anyone — alive or dead — who might have been left behind in Harvey’s fetid floodwaters, which have now heavily damaged more than 37,000 homes and destroyed nearly 7,000 statewide. 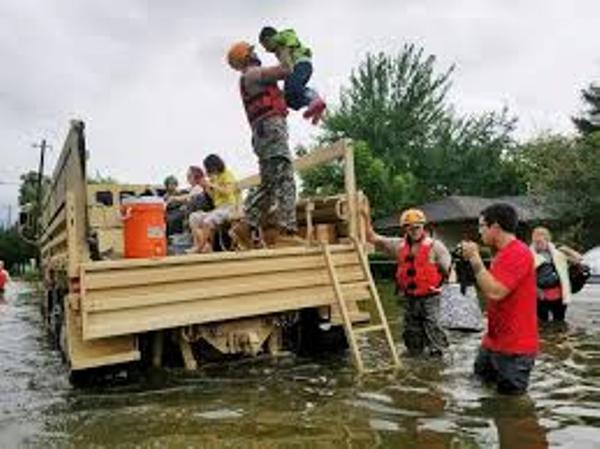 More than 200 firefighters, police officers and members of an urban search-and-rescue team fanned out across the Meyerland neighborhood for survivors or bodies. They yelled “fire department!” as they pounded with closed fists on doors, peered through windows and checked with neighbors. The streets were dry but heaped with soggy furniture, carpet and wood.

“We don’t think we’re going to find any humans, but we’re prepared if we do,” said District Chief James Pennington of the Houston Fire Department.

The confirmed death toll stood at 31, though it is expected to rise. But by midday, the temporary command center in a J.C. Penney parking lot had received no reports of more bodies from the searches, which are expected to take up to two weeks.

Unlike during Hurricane Katrina’s aftermath in New Orleans, crews used GPS devices to log the homes they checked rather than spray painting neon X’s on the homes, which also avoided alerting potential thieves to vacant homes.

Elsewhere, the loss of power at a chemical plant set off explosions that prompted a public health warning. The blasts at the Arkema Inc. plant northeast of Houston also ignited a 30- to 40-foot flame and sent up a plume of acrid smoke that the head of the Federal Emergency Management Agency initially described as “incredibly dangerous.”

FEMA later backed away from that statement, saying that Administrator Brock Long spoke out of an abundance of caution. An Environmental Protection Agency analysis of the smoke showed that it posed no immediate threat to public health, the agency said.

The French operator of the plant warned that up to eight more chemical containers could burn and explode as chemicals stored there degraded without refrigeration.

The latest statewide damage surveys revealed the staggering extent of the destruction. The figures from the Texas Department of Public Safety did not include the tens of thousands of homes with minor damage.

Rescues continued, as did the search for shelter among people made homeless by the storm. Emergency officials reported 32,000 people in shelters across Texas.

The Harris County FEMA director said the agency was looking at how to house people who have lost their homes to Harvey. The priority is to get them out of shelters and into some form of temporary housing, with hotels being one option, he said.

“Right now nothing is off the table,” Tom Fargione said Thursday. “This is a tremendous disaster in terms of size and scope. I want to get thinking beyond traditional methodologies you’ve seen in the past.”

As the water receded in the nation’s fourth-largest city, the threat of major damage from the storm shifted to a region near the Texas-Louisiana state line.

Beaumont, Texas, with a population of nearly 120,000, struggled with rising water. The city lost water service after its main pump station was overwhelmed by the swollen Neches River. That forced Baptist Beaumont Hospital to move patients to other facilities.

A steady stream of ambulances and helicopters arrived at the hospital to pick up the patients, some of whom already had been removed from flooded nursing homes. Hospital spokeswoman Mary Poole said other patients were able to be discharged.

The city’s second hospital, Christus St. Elizabeth, said it was using stored water and accepting only critical and emergency patients.

Some people who had not gotten the word were still arriving Thursday seeking medical attention, including J.D. Clark, who said he had a heart condition. He wanted medicine and water but was turned away. Clark said the landlord had turned off the power at his apartment complex.

“We’re trying to get up out of here,” said his wife, Regina Blackburn. “I’m trying to call for a hotel, but they won’t answer. We’re leaving. We’re getting out of Beaumont.”

That’s a challenge, though, because most of the highways out of the city are flooded.

Economists said the storm shut down everything from plastics plants to oil refineries to the Houston port — the second-busiest in the nation — which could affect the nation’s economy.

Macroeconomic Advisers, a forecasting firm, calculates that economic damage could shave between 0.3 and 1.2 percentage points off the nation’s economic growth in the July-September quarter. The economy had been expected to grow at an annual rate of about 3 percent from July through September.

Also Thursday, Energy Secretary Rick Perry said he would release 500,000 barrels of crude oil from an emergency stockpile in a bid to prevent gasoline prices from spiking in the wake of disruptions caused by Harvey.

As the floodwaters dropped, Houston public schools pushed back the start of classes by two weeks because of Harvey. The nation’s seventh-largest school district had been scheduled to open Monday, but classes will now resume Sept. 11.

Although it has been downgraded to a tropical depression, Harvey was still expected to dump heavy rain on parts of Louisiana, Tennessee and Kentucky through Friday. Forecast totals ranged from 4 to 8 inches (10 to 20 centimeters), with some places possibly getting up to a foot.

For much of the Houston area, the rain had passed. But with temperatures likely to climb in to the low 90s over the weekend, residents were warned about the dangers of heat exhaustion, especially for people who lost power or must toil outdoors.

Harvey initially came ashore as a Category 4 hurricane in Texas on Friday, then went back out to sea and lingered off the coast as a tropical storm for days, inundating flood-prone Houston.

Harvey’s five straight days of rain totaled close to 52 inches, the heaviest tropical downpour ever recorded in the continental U.S.