Southwest Research Institute scientists integrated NASA’s New Horizons discoveries with data from ESA’s Rosetta mission to develop a new theory about how Pluto may have formed at the edge of our solar system. 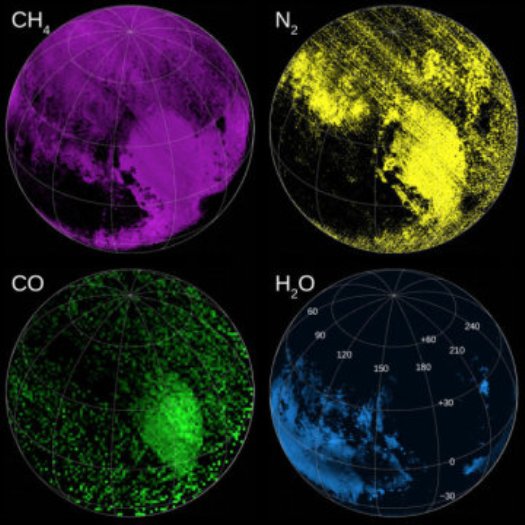 “We’ve developed what we call ‘the giant comet’ cosmochemical model of Pluto formation,” said Dr. Christopher Glein of SwRI’s Space Science and Engineering Division. The research is described in a paper published online today in Icarus. At the heart of the research is the nitrogen-rich ice in Sputnik Planitia, a large glacier that forms the left lobe of the bright Tombaugh Regio feature on Pluto’s surface. “We found an intriguing consistency between the estimated amount of nitrogen inside the glacier and the amount that would be expected if Pluto was formed by the agglomeration of roughly a billion comets or other Kuiper Belt objects similar in chemical composition to 67P, the comet explored by Rosetta.”

In addition to the comet model, scientists also investigated a solar model, with Pluto forming from very cold ices that would have had a chemical composition that more closely matches that of the Sun.

Scientists needed to understand not only the nitrogen present at Pluto now — in its atmosphere and in glaciers — but also how much of the volatile element potentially could have leaked out of the atmosphere and into space over the eons. They then needed to reconcile the proportion of carbon monoxide to nitrogen to get a more complete picture. Ultimately, the low abundance of carbon monoxide at Pluto points to burial in surface ices or to destruction from liquid water.

“Our research suggests that Pluto’s initial chemical makeup, inherited from cometary building blocks, was chemically modified by liquid water, perhaps even in a subsurface ocean,” Glein said. However, the solar model also satisfies some constraints. While the research pointed to some interesting possibilities, many questions remain to be answered.

“This research builds upon the fantastic successes of the New Horizons and Rosetta missions to expand our understanding of the origin and evolution of Pluto,” said Glein. “Using chemistry as a detective’s tool, we are able to trace certain features we see on Pluto today to formation processes from long ago. This leads to a new appreciation of the richness of Pluto’s ‘life story,’ which we are only starting to grasp.”