Scientists expressed surprise at the size of the tsunami that devastated the Indonesian city of Palu on Friday, saying an earthquake like the one that preceded it would not necessarily spawn such destructive waves. 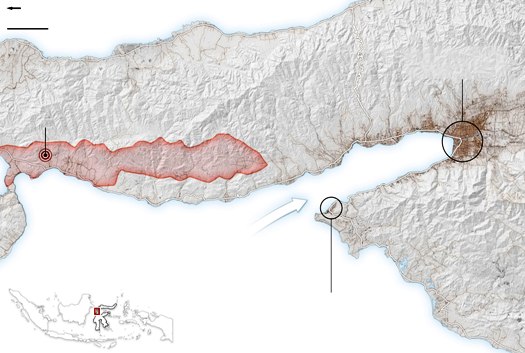 “We expected it might cause a tsunami, just not one that big,” said Jason Patton, a geophysicist who works for a consulting firm, Temblor, and teaches at Humboldt State University in California.

But he added, “When events like this happen, we are more likely to discover things that we haven’t observed before.”

The 7.5-magnitude quake, which struck in the early evening, was centered along the coast of the island of Sulawesi about 50 miles north of Palu. Shortly afterward — within 30 minutes by some accounts — waves as high as 18 feet crashed ashore in the city, destroying buildings, smashing vehicles and killing hundreds of people.

Other communities on Sulawesi, including the city of Donggala, were also hit by the tsunami, although there are as yet few details of the destruction or death toll outside of Palu.

Catastrophic tsunamis are often the result of so-called megathrust earthquakes, when huge sections of the Earth’s crust are deformed, moving vertically along a fault. This suddenly displaces enormous amounts of water, creating waves that can travel at high speed across ocean basins and cause destruction thousands of miles from the quake’s origin.

The 2004 Indian Ocean tsunami, which had waves as high as 100 feet and killed nearly a quarter of a million people from Indonesia to South Africa, resulted from a 9.1-magnitude megathrust quake in Sumatra.

By contrast, the fault that ruptured on Friday was a so-called strike-slip fault, in which the earth movement is largely horizontal. That kind of movement would not ordinarily create a tsunami.

But under certain circumstances it can, Dr. Patton said.

A strike-slip fault might have some amount of vertical motion that could displace seawater. Or the fault’s rupture zone, which in this case was estimated to be about 70 miles long, may pass through an area where the seafloor rises or drops off, so that when the fault moves during the quake, it pushes seawater in front of it.

Another possibility is that the tsunami was created indirectly. The violent shaking during the quake may have caused an undersea landslide that would have displaced water and created waves. Such events are not uncommon; several occurred during the 1964 9.2-magnitude Alaska earthquake, for example.

Dr. Patton said a combination of factors may have contributed to the tsunami. Studies of the seafloor will be crucial to understanding the event. “We won’t know what caused it until that’s done,” he said.

The tsunami could also have been affected by Palu’s location at the end of a narrow bay. The coastline and the contours of the bottom of the bay could have focused the wave energy and guided it up the bay, increasing the wave height as it approached shore.

Such effects have also been seen before. Crescent City, Calif., has been hit by over 30 tsunamis, including one after the 1964 Alaska quake in which 11 people were killed, because of the contours of the seafloor in the region and the city’s topography and location.

Whatever the genesis of the waves, a 7.5-magnitude quake would not be expected to create an ocean-wide event, but rather a more localized one, as was the case on Friday.

With the tsunami generated so close to Palu, there was little time for people to escape. A tsunami warning was issued by the government and was lifted about half an hour after the quake, apparently after the tsunami hit Palu.

Indonesia currently uses only seismographs, global positioning system devices and tide gauges to detect tsunamis, which are of limited effectiveness, said Louise Comfort, a professor at the University of Pittsburgh graduate school. She has been involved in a project to bring new tsunami sensors to Indonesia.

In the United States, the National Oceanic and Atmospheric Administration has a sophisticated network of 39 sensors on the ocean bottom that can detect extremely small pressure changes indicating the passage of a tsunami. The data are then relayed via satellite and analyzed, and an alert is issued if required.

Dr. Comfort said that Indonesia had a similar network of 22 sensors but that they were no longer in use because they were not being maintained or had been vandalized.

The project she is working on would bring a new system to Indonesia that would use undersea communication to avoid the use of surface buoys that could be vandalized or hit by ships.

Dr. Comfort said she had been discussing the project with three Indonesian government agencies. Plans to install a prototype of the system in western Sumatra were delayed this month. “They couldn’t find a way to work together,” she said.

“It’s heartbreaking when you know the technology is there,” she added. “Indonesia is on the Ring of Fire — tsunamis will happen again.”