A team of researchers, two from Tohoku University in Japan and two from the University of California in the U.S., has found evidence that suggests that a speedup in small underground deformations may occur prior to larger earthquakes, possibly providing a means for sounding a warning. In their paper published in the journal Science, the team describes how they pored over seismic data that spanned 28 years and which included approximately 6,000 seismic events, and what they found as a result—they also suggest that their findings might one day lead to a true earthquake early warning system. 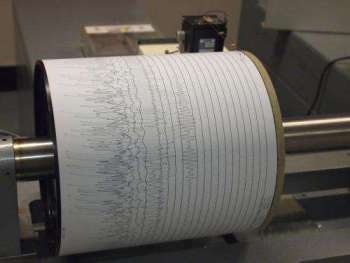 Scientists the world over have for years been searching for a way to predict when an earthquake will strike, with enough certainty to warn people in the area. To date such efforts have come up empty, though much has been learned in the process. In this new effort, the researchers report that they believe they may have found a possible indicator of an impending quake, and it is based on what are known as slips, small underground movement similar to earthquakes, but which happen so slowly that they don’t cause damage or even register on seismic monitors—the only way to detect them is to use GPS equipment.

To come to these conclusions, the researchers analyzed seismic data for Japan’s two largest islands, going back to 1984. Doing so led to the identification of 1,500 instances where there appeared to be a pattern of repetition—that allowed them to estimate the speed at which the tectonic plates below were moving. They then used statistics to correlate slippages with non-repeating measurable quakes with a magnitude of 5 or higher. Doing so revealed that there appeared to be a speedup in slippage just prior to major earthquakes. The team also looked at GPS data, which can actually be used to measure tectonic shifting, and report that it matched the rates they had calculated earlier.

The team acknowledges that much more work needs to be done before it can be confirmed that GPS monitoring devices could one day offer an early warning system, but suggest their research shows that there is the potential for such an outcome.