A team of scientists has found new evidence that the Great Permian Extinction, which occurred approximately 250 million years ago, was caused by massive volcanic eruptions that led to significant environmental changes. 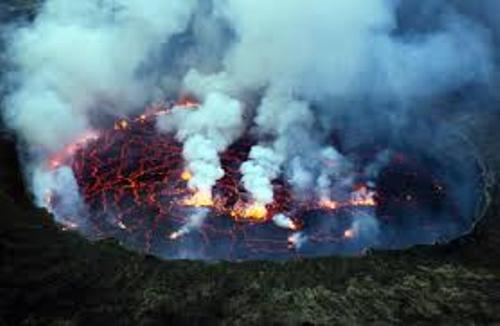 The study, which appears in the journal Scientific Reports, reports a global spike in the chemical element nickel at the time of extinction. The anomalous nickel most likely came from emanations related to the concurrent huge volcanic eruptions in what is now Siberia. These eruptions, the researchers say, are associated with nickel-rich magmatic intrusions — rocks formed from the cooling of magma — that contain some of the greatest deposits of nickel ore on the planet.

Using an Inductively Coupled Plasma Mass Spectrometer, which measures the abundance of rare elements at their atomic level, the scientists documented anomalous peaks of nickel in regions ranging from the Arctic to India at the time of the Great Permian Extinction — distributions that suggest these nickel anomalies were a worldwide phenomenon.

This new evidence of a nickel fingerprint at the time of the extinctions convinced the scientists that it was the volcanic upheaval in Siberia that produced intense global warming and other environmental changes that led to the disappearance of more than 90 percent of all species.

“The Siberian volcanic eruptions and related massive intrusions of nickel-rich magmas into Earth’s crust apparently emitted nickel-rich volatiles into the atmosphere, where they were distributed globally,” explains New York University geologist Michael Rampino, the paper’s senior author. “At the same time, explosive interactions of the magma with older coal deposits could have released large amounts of carbon dioxide and methane, two greenhouse gases, which would explain the intense global warming recorded in the oceans and on land at the time of the mass extinctions. The warm oceans also became sluggish and depleted in dissolved oxygen, contributing to the extinction of many forms of life in the sea.”

“This new finding, which contributes further evidence that the Siberian Trap eruptions were the catalyst for the most extensive extinction event Earth has ever endured, has exciting implications,” says Sedelia Rodriguez, a co-author of the paper and lecturer in the department of Environmental Science at Barnard College. “We look forward to expanding our research on nickel and other elements to delineate the specific areas affected by this eruption. In doing so, we hope to learn more about how these events trigger massive extinctions that affect both land and marine animals. Additionally, we hope this research will contribute to determining whether an event of this magnitude is possible in the future.”