The world doesn’t stop spinning. But every so often, it slows down. For decades, scientists have charted tiny fluctuations in the length of Earth’s day: Gain a millisecond here, lose a millisecond there. Last week at the annual meeting of the Geological Society of America here, two geophysicists argued that these minute changes could be enough to influence the timing of major earthquakes—and potentially help forecast them. 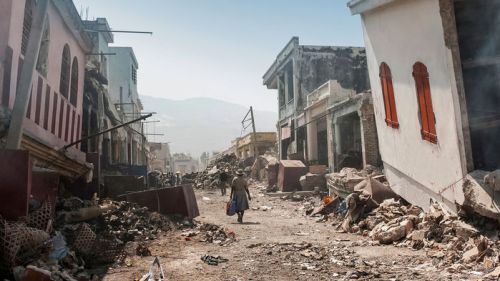 During the past 100 years, Earth’s slowdowns have correlated surprisingly well with periods with a global increase in magnitude-7 and larger earthquakes, according to Roger Bilham of the University of Colorado (CU) in Boulder and Rebecca Bendick at the University of Montana in Missoula. Usefully, the spike, which adds two to five more quakes than typical, happens well after the slow-down begins. “The Earth offers us a 5-years heads up on future earthquakes, which is remarkable,” says Bilham, who presented the work.

Most seismologists agree that earthquake prediction is a minefield. And so far, Bilham and Bendick have only fuzzy, hard-to-test ideas about what might cause the pattern they found. But the finding is too provocative to ignore, other researchers say. “The correlation they’ve found is remarkable, and deserves investigation,” says Peter Molnar, a geologist also at CU.

The research started as a search for synchrony in earthquake timing. Individual oscillators, be they fireflies, heart muscles, or metronomes, can end up vibrating in synchrony as a result of some kind of cross-talk—or some common influence. To Bendick, it didn’t seem a far jump to consider the faults that cause earthquakes, with their cyclical buildup of strain and violent discharge, as “really noisy, really crummy oscillators,” she says. She and Bilham dove into the data, using the only complete earthquake catalog for the past 100 years: magnitude-7 and larger earthquakes.

In work published in August in Geophysical Research Letters they reported two patterns: First, major quakes appeared to cluster in time—although not in space. And second, the number of large earthquakes seemed to peak at 32-year intervals. The earthquakes could be somehow talking to each other, or an external force could be nudging the earth into rupture.

Exploring such global forces, the researchers eventually discovered the match with the length of day. Although weather patterns such as El Nino can drive day length to vary back and forth by a millisecond over a year or more, a periodic, decades-long fluctuation of several milliseconds—in particular, its point of peak slow down about every three decades or so—lined up with the quake trend perfectly. “Of course that seems sort of crazy,” Bendick says. But maybe it isn’t. When day length changes over decades, Earth’s magnetic field also develops a temporary ripple. Researchers think slight changes in the flow of the molten iron of the outer core may be responsible for both effects. Just what happens is uncertain—perhaps a bit of the molten outer core sticks to the mantle above. That might change the flow of the liquid metal, altering the magnetic field, and transfer enough momentum between the mantle and the core to affect day length.

Seismologists aren’t used to thinking about the planet’s core, buried 2900 kilometers beneath the crust where quakes happen. But they should, Bilham said during his talk here. The core is “quite close to us. It’s closer than New York from here,” he said.

At the equator, Earth spins 460 meters per second. Given this high velocity, it’s not absurd to think that a slight mismatch in speed between the solid crust and mantle and the liquid core could translate into a force somehow nudging quakes into synchrony, Molnar says. Of course, he adds, “It might be nonsense.” But the evidence for some kind of link is compelling, says geophysicist Michael Manga of the University of California, Berkeley. “I’ve worked on earthquakes triggered by seasonal variation, melting snow. His correlation is much better than what I’m used to seeing.”

One way or another, says James Dolan, a geologist at the University of Southern California in Los Angeles, “we’re going to know in 5 years.” That’s because Earth’s rotation began a periodic slow-down 4-plus years ago. Beginning next year, Earth should expect five more major earthquakes a year than average—between 17 to 20 quakes, compared with the anomalously low four so far this year. If the pattern holds, it will put a new spin on earthquake forecasting.