Hurricane Florence continued to ravage North Carolina on Sunday, prompting weather alerts for every county in the state. The storm moved sluggishly — it made landfall at about 6 mph Friday and had slowed to 2 mph on Saturday, dumping massive amounts of rain as it went. The deluge, called a 1,000-year rain event by the state’s governor, swelled rivers and drew comparisons to last years’ Hurricane Harvey. But Florence’s slow forward movement and dangerous torrent of heavy rain aren’t unique to hurricanes. These features are also present in big storms that strike around the country. And what’s more, extreme rainfall events are hitting more often, and big, slow-moving systems are becoming more common. As the climate changes, it’s not just that we can expect to see more hurricanes like Florence, it’s also that more storms of other types will look like this, too. 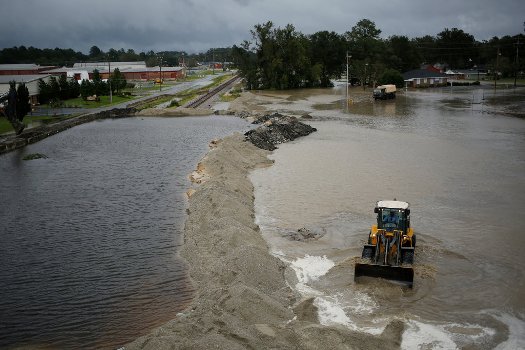 Even though hurricanes are formed differently from inland storms, the basic components of a record-breaking flood can be present in both, said Andreas Prein, a scientist at the National Center for Atmospheric Research. “It takes very high rainfall rates, high precipitation. It has to cover a big area. And it has to move slow. Those are the big ingredients that produce a big flood,” he said.

You can see the added dangers of a slow-moving storm by looking at the costliest hurricanes to hit the U.S. The forward speed of Atlantic hurricanes tends to vary by latitude, but the eastern and Gulf coasts mostly fall into an area where the average forward speeds are above 17 mph. The costliness of a storm depends in part on where it strikes — hitting a large urban area drives up costs much faster than hitting a more sparsely populated rural area — but all but three of the costliest storms moved at slower-than-average pace.

Florence was traveling at about a fraction of the average speed for its latitude when it made landfall and has made it obvious how a slow, wet storm can turn a hurricane from a coastal wind disaster to a far-reaching flood risk.

And one of the calling cards of climate change is the wet storms it produces. Scientists are still studying how the shifting environment is changing weather systems, but they’re more certain than usual that it’s causing an increase in extreme precipitation events. “Just look at the U.S. records for the last 100 years. Extreme daily rainfall rates went up in all regions,” Prein said.

There’s a clear causal explanation for that, said David Gochis, a hydrometeorologist at NCAR. Warmer air means more evaporation of surface water, resulting in more water vapor in the air that’s available to fall as rain.

The forward speed of storms is not as well-studied, experts said, but there’s some evidence that the same changing climate that’s leading to more extreme rainfall is also putting the brakes on big rainstorms, which means they dump more water in one place. “There’s research out there in the atmospheric community that’s found that in certain seasons — especially fall — large-scale, mid-latitude storms are slowing down,” Gochis said. And it’s not just hurricanes. What’s happening right now in North Carolina is, in this way, pretty similar to what happened in Colorado in 2013, when a storm parked over a single area for a week, causing flooding that collapsed bridges and homes and spurred massive evacuations.

Last year, Prein was involved in a paper that tried to model the impacts of climate change on large storm systems of all kinds, including, but not limited to, hurricanes. Prein said his paper didn’t find evidence that climate change was making storms move more slowly. But, he said, you could still end up with a higher likelihood of encountering a big, slow, wet storm. “It’s not that climate change is changing the speed of movement, but you get more big, high-intensity storms, which [tend to] move slowly,” he said.

The result is a shifting norm in flood risk across the country. If you live on the coast, you can probably expect more flooding caused by hurricanes like Florence. If you live in the Midwest, you can probably expect more thunderstorm-related flooding. And in both cases, the kind of big floods that were rare in the past are becoming more common now. How big can the storms (and the floods) get? We don’t know what the limits are, Gochis said. We know what’s been normal in the past. But if storms are getting slower and wetter, “Well, then you have to do the calculation again,” he said.