The Solar Wind Continues To Blow: For the 3rd day in a row, Earth remains inside a stream of high-speed solar wind flowing from a canyon-shaped hole in the sun’s atmosphere. NOAA forecasters say there is a 40% chance of minor G1-class geomagnetic storms on Oct. 9th as our planet’s magnetic field is buffeted by the gaseous material. 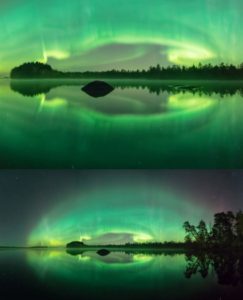 “The first hints of green were visible about an hour after the sunset, which gave me time to drive to a lake far from city lights,” says Helin. “As the auroras intensified, I waded into the water and waited for the right moment to take this shot. It was an extremely beautiful display!”