An international team of researchers from United Kingdom, Denmark, and Germany has found robust evidence for signatures of the 11-year sunspot cycle in the tropical Pacific. They analyzed historical time series of pressure, surface winds and precipitation with specific focus on the Walker Circulation—a vast system of atmospheric flow in the tropical Pacific region that affects patterns of tropical rainfall. They have revealed that during periods of increased solar irradiance, the trade winds weaken and the Walker circulation shifts eastward. 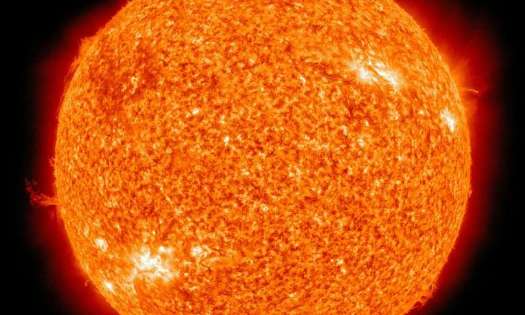 Stergios Misios, a postdoctoral researcher at the University of Oxford, said, “We deal with a very short record of observations in the tropical Pacific, and we must be very careful with how we filter out other interannual fluctuations. After a careful treatment of the data covering the last 60 years, we detected a robust slowdown of the Walker cell during years associated with solar-cycle maxima.” The analysis shows that in tandem with changes in the wind anomalies, the dominant patterns of tropical precipitation shift to the central Pacific during solar-cycle maxima. As a result, rainfall decreases over Indonesia and in the western Pacific, and increases over the central Pacific Ocean.

The issue of solar influences on climate is long and controversial, as there have been numerous claims that did not survive proper statistical scrutiny in most cases. But besides statistical verification lies an even more challenging problem: How could miniscule changes in incoming solar radiation produce significant climate signatures?

“Soon enough, we realized that the magnitude of the wind anomalies that we detected in observations simply could not be explained by radiative considerations alone. We thought that if it comes from the sun, there must be another mechanism that amplifies the weakening of the Walker circulation,” said Prof. Lesley Gray of University of Oxford. With the aid of a global climate model, this mechanism was found in the dynamical coupling between the atmosphere and ocean circulation in the tropical Pacific.

Averaged over the globe, the surface temperature imprint of the solar cycle barely reaches 0.1 K in a solar maximum—almost eight times weaker than the global warming trends observed in the 20th century. Yet, even such a weak surface warming influences the Walker circulation through changes in global hydrology. As the surface warms, water vapor in the atmosphere increases at a higher rate than is lost by precipitation, necessitating a weakening of the Walker cell. This is a well-tested mechanism in model simulations of increased CO2 concentrations but it turns out that is operating under the 11-year solar cycle, too.

S. Misios said, “Our model showed westerly wind anomalies in the Pacific region even when we considered only changes in global hydrology, but the magnitude was far too weak. We hypothesized that atmosphere-ocean coupling, essentially the Bjerknes feedback, can amplify the solar signal.”

Using a climate model forced by the 11-year solar cycle alone, researchers found the evidence to support their hypothesis. Their model showed much stronger wind anomalies in the Pacific. They proposed that changes in global hydrology and the Bjerknes feedback mediate solar cycle influences on the Tropical Pacific. The researchers now hope that if the interplay between those mechanisms is properly represented by other climate models, it could give potential to improve the accuracy of decadal predictions in that region.