A team of Japanese planetary researchers led by Osaka University’s Professor Kentaro Terada has discovered solar wind and Earth’s magnetic field can transport high-energy ions of biogenic oxygen from the atmosphere of our planet to the lunar surface. 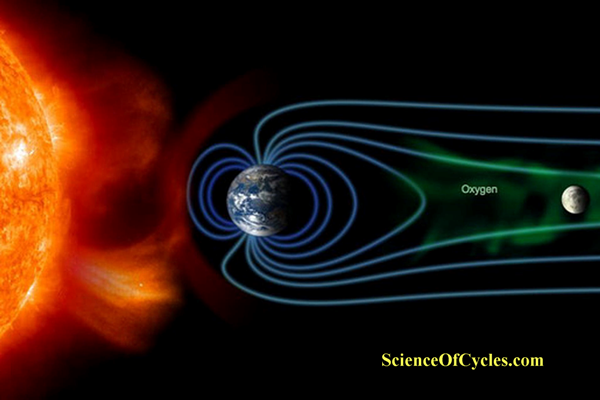 “The Earth is protected from solar wind and cosmic rays by the planet’s magnetic field,” Professor Terada and colleagues explained.

On Earth’s night side, its magnetic field is extended like a comet tail and makes a space like a streamer (we call it a ‘geotail’). At the center of the geotail, there is an area which exists as a sheet-like structure of hot plasma.”

In a paper published the journal Nature Astronomy, the researchers report observations from the Japanese spacecraft Kaguya of significant numbers of high-energy oxygen ions, seen only when the Moon was in the Earth’s plasma sheet.

“We succeeded in observing that oxygen from the ionosphere of Earth was transported to the Moon 236,000 miles (380,000 km) away,” they said.

Examing plasma data of Kaguya’s Magnetic field and Plasma experiment/Plasma energy Angle and Composition experiment (MAP-PACE) about 62 miles (100 km) above the Moon’s surface, and discovered that high-energy oxygen ions appeared only when the Moon and the spacecraft crossed the plasma sheet.

Oxygen ions detected by the team had a high energy of 1-10 keV. These ions can be implanted into a depth of tens of nanometers of a metal particle. This is a very important finding in understanding the complicated isotopic composition of oxygen on the lunar regolith, which has long been a mystery.

Through observations, we demonstrated the possibility that components that lack 16O, which is a stable isotope of oxygen and is observed in the ozone layer, a region of Earth’s stratosphere, were transported to the Moon surface and implanted into a depth of tens of nanometers on the surface of lunar soils.

Our Kaguya observation of significant Earth wind from the current geomagnetic field strengthens the hypothesis that information on the lost ancient atmosphere of our planet could be preserved on the surface of lunar soils.