The Sun’s surface temperature is around six thousand degrees kelvin, but the solar atmosphere—the corona and the solar wind—can reach a million degrees kelvin, a long-standing mystery in solar physics. Now, with data from the Parker Solar Probe, researchers have found evidence supporting a partial explanation for this mystery: magnetic waves driven by subsurface turbulence can impart energy to ions in these regions.

The exact mechanism of heating has been debated for decades, but the story appears to start with turbulent flow in the Sun’s convection zone, the outermost layer below the surface. In fluid dynamics, turbulence causes heating through a process known as turbulent energy cascade, where large eddies are converted into progressively smaller eddies. The energy in the smallest eddies is converted into heat through collisions between molecules. 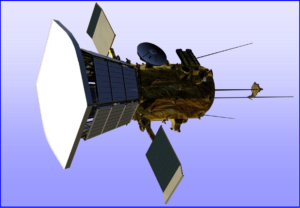 Solar physicists think that a similar turbulent cascade happens in the Sun. Heat-driven turbulence below the surface disturbs the solar magnetic-field lines that extend into the corona, causing waves to propagate like the vibrations of a plucked guitar string. These long-wavelength, low-frequency magnetic waves travel into the corona and the solar wind, generating disordered waves at progressively shorter wavelengths. But the plasma of charged particles that constitutes the solar corona is not dense enough for collisions between particles to generate enough heat to explain the coronal temperature. Instead, something more exotic must be occurring.

One idea, called cyclotron resonant heating, is that the turbulent cascade generates waves that are short enough to be in resonance with the motion of ions in the corona. This resonance allows these waves to pump energy into the ions’ cyclotron motion—helical trajectories that spiral around magnetic-field lines. This energy boost heats the corona and the solar wind, which consists of particles that follow magnetic-field lines extending outward from the corona. There are several other proposed heating mechanisms, and it’s likely that more than one of them is in effect.