Even tiny dust particles have stories to tell − especially when they come from outer space. Meteorites contain tiny amounts of what is popularly known as stardust, matter originating from dying stars. Such stardust is part of the raw material from which some 4.6 billion years ago our planets and the meteorite parent bodies, the so-called asteroids, emerged. Peter Hoppe and his team at the Max Planck Institute for Chemistry in Mainz have now discovered that many of the silicate stardust particles in meteorites are much smaller than was previously thought. To date, many of them have therefore probably been overlooked in studies, leading the scientists to believe that the mass of the silicate stardust particles in meteorites is at least twice as large as previously assumed. 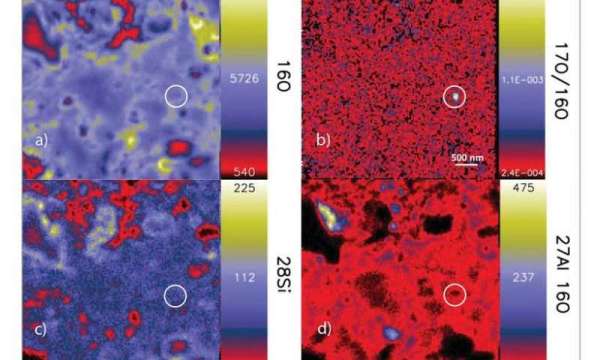 The Max Planck scientists obtained the new findings by changing their investigational methods. Using the NanoSIMS ion probe, the researchers in Mainz produced “maps” of thinly sectioned meteorite samples. Such maps show the abundance distribution of specific isotopes in the submicrometre range. The sample is first scanned with a focused ion beam. The particles knocked out of the sample in the process are then analyzed by mass spectrometry. However, even the usual 100-nanometre-wide ion beam was too wide for the latest discovery. “Until now, it was only possible to reliably find stardust grains measuring at least about 200 nanometres. We’ve narrowed the ion beam for our investigations, which means that we’re able to detect many smaller stardust grains,” Peter Hoppe, Group Leader at the MPI for Chemistry, explains. This method was always thought to be too ineffective for sampling, he continues. “Using the conventional, coarser method, you can scan an area ten times greater in the same amount of time.” The researchers were rewarded for their patience and found an unexpectedly high number of “hotspots” with anomalous isotopic abundances in the images of the meteoritic thin sections, indicating the presence of silicate stardust. “Evidently, many of the silicate stardust grains are smaller than was previously thought. With the conventional method, meteoritic stardust grains measuring less than about 200 nanometres have for the most part gone undiscovered,” Peter Hoppe concludes.

A chief component of silicates is oxygen. Unlike silicon carbide stardust, for example, silicate stardust grains cannot be separated from meteorites by chemical methods. Because of this, they remained undetected for a long time. It was only with the help of the NanoSIMS ion probe that the first silicate stardust particle was identified as a “hotspot” in oxygen isotope abundance maps in 2002. The NanoSIMS ion probe is a secondary ion mass spectrometer that is able to measure isotopes on the nanoscale.

Hotspots are areas with unusual isotopic abundances – the fingerprints of the parent stars, which can be clearly identified in the isotope abundance images obtained by measuring the samples. Isotopes of a chemical element have the same number of protons but a different number of neutrons in the nucleus.

Meteoroids are fragments of asteroids (rocky and metal-containing small planets), which circle around the sun as celestial bodies. If meteoroids reach the Earth and survive atmospheric entry, they are called meteorites. A distinction is made between stony, stony-iron and iron meteorites. The Queen Alexandra Range (QUE) 99177, Meteorite Hills (MET) 00426 and Acfer 094 meteorites surveyed by the MPI for Chemistry researchers are a so-called carbonaceous chondrites, which belong to the group of stony meteorites.