Geoscientists have long puzzled over the mechanism that created the Tibetan Plateau, but a new study finds that the landform’s history may be controlled primarily by the strength of the tectonic plates whose collision prompted its uplift. Given that the region is one of the most seismically active areas in the world, understanding the plateau’s geologic history could give scientists insight to modern day earthquake activity. 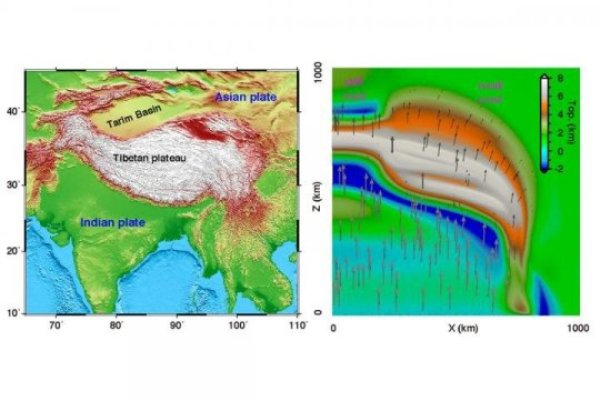 The new findings are published in the journal Nature Communications.

Even from space, the Tibetan Plateau appears huge. The massive highland, formed by the convergence of two continental plates, India and Asia, dwarfs other mountain ranges in height and breadth. Most other mountain ranges appear like narrow scars of raised flesh, while the Himalaya Plateau looks like a broad, asymmetrical scab surrounded by craggy peaks.

“The asymmetric shape and complex subsurface structure of the Tibetan Plateau make its formation one of the most significant outstanding questions in the study of plate tectonics today,” said University of Illinois geology professor and study co-author Lijun Liu.

In the classic model of Tibetan Plateau formation, a fast-moving Indian continental plate collides head-on with the relatively stationary Asian plate about 50 million years ago. The convergence is likely to have caused the Earth’s crust to bunch up into the massive pile known as the Himalaya Mountains and Tibetan Plateau seen today, but this does not explain why the plateau is asymmetrical, Liu Said.

“The Tibetan Plateau is not uniformly wide,” said Lin Chen, the lead author from the Chinese Academy of Sciences. “The western side is very narrow and the eastern side is very broad — something that many past models have failed to explain.”Many of those past models have focused on the surface geology of the actual plateau region, Liu said, but the real story might be found further down, where the Asian and Indian plates meet.

“There is a huge change in topography on the plateau, or the Asian plate, while the landform and moving speed of the Indian plate along the collision zone are essentially the same from west to east,” Liu said. “Why does the Asian plate vary so much?”

To address this question, Liu and his co-authors looked at what happens when tectonic plates made from rocks of different strengths collide. A series of 3-D computational continental collision models were used to test this idea.

“We looked at two scenarios — a weak Asian plate and a strong Asian plate,” said Liu. “We kept the incoming Indian plate strong in both models.”

When the researchers let the models run, they found that a strong Asian plate scenario resulted in a narrow plateau. The weak Asian plate model produced a broad plateau, like what is seen today.

“We then ran a third scenario which is a composite of the strong and weak Asian plate models,” said Liu. “An Asian plate with a strong western side and weak eastern side results in an orientation very similar to what we see today.”

“It is exciting to see that such a simple model leads to something close to what we observe today,” Liu said. “The location of modern earthquake activity and land movement corresponds to what we predict with the model, as well.”