Although they are used to weathering several typhoons every year, Hong Kongers woke up shell-shocked on Monday after Super Typhoon Mangkhut, the strongest storm on the planet recorded this year, tore through the city on Sunday, injuring over 300 people but killing none. Even after such a devastating storm, most people went back to work on Monday, and the stock markets opened for trading. 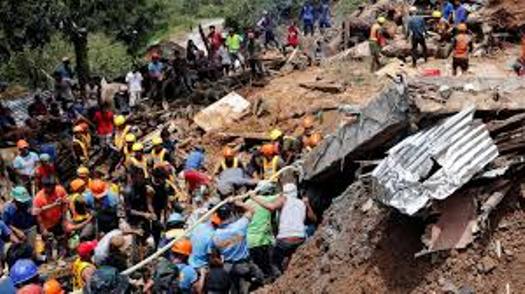 Despite weakening after first hitting the Philippines and killing at least 65 people, the Hong Kong Observatory confirmed Mangkhut was the most powerful storm to hit the southern Chinese territory since records have been kept beginning in 1946.

Hong Kong avoided a direct hit and escaped without any fatalities, but Mangkhut’s ferocious winds and storm surge uprooted more than 1500 trees and broke hundreds of windows across the city.

Record-setting storm surges of more than 11 feet were measured in some parts of Hong Kong, while huge waves crashed into waterfront apartments. Low elevation and coastal neighborhoods like the beach town of Shek O and waterfront housing estate Heng Fa Chuen experienced flooding.

Windows across Hong Kong were blown out by wind gusts that were recorded at speeds of up to 120 mph. Most dramatically, dozens of windows of the One Harbourfront complex that juts out into Hong Kong’s famed Victoria Harbor were destroyed. Online video taken during the storm showed reams of paper being blown out from the building.

Hong Kong’s normally secure and bendable bamboo-scaffolding used in construction could not withstand the force of the winds, and many scaffolds were ripped off of buildings, crashing into the streets below.

The Hong Kong Government made the call to lower the storm signal early Monday morning to allow the stock market to open for trading, meaning that Hong Kongers were also expected to go to work.

Public transportation was not running at full capacity as numerous bus routes and light rail services were suspended due to debris, causing major crowding at transportation hubs across the city.

In a press conference Monday, trade union leader Lee Cheuk-yan criticized Hong Kong’s Chief Executive Carrie Lam for not giving workers a day off to recover from the typhoon.

Terence Chong, an Economics professor at Chinese University of Hong Kong told the South China Morning Post that if the entire city had not worked on Monday, the economic loss could amount to about $7.3 billion Hong Kong dollars, the equivalent of $930 million U.S. dollars.

What was left of Mangkhut went on to wreak havoc on neighboring Macau on Sunday, which suspended normal casino operations for the first time ever. The storm later made landfall in China’s Guangdong province, where it has killed at least four people.