A team of researchers affiliated with several institutions in Japan has found evidence showing that condensed aluminum oxide dust surrounding the star W Hydrae plays a key role in accelerating the stellar wind. In their paper published on the open access site Science Advances, the team describes their study of the star and the gases that surround it. 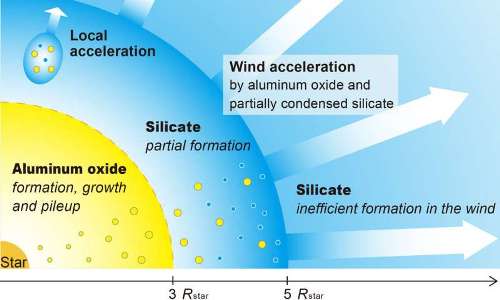 As scientists look to the stars to understand the nature of the universe, they also seek answers regarding universal origins. The Big Bang, theory, for example, suggests how things might have started, but what processes led to the creation of atoms, for example? In this new effort, the researchers believe they may have found a source: W Hydrae, a star that is part of the Hydrae constellation and is classified as an asymptotic giant branch (AGB) star—stars that are still evolving and are in the low to medium mass size. W Hydrae has approximately nine times the mass of our sun and is a popular object of study due to its brightness. Scientists have come to believe that the study of AGBs might offer clues regarding how the elements were created.

Using the Atacama Large Millimeter/submillimeter Array of telescopes, the researchers observed W Hydrae, one of the brightest stars as seen from Earth. The researchers found evidence of aluminum oxide dust in its outer shell—within three “stellar radii.” The presence of the dust, the researchers suggest, might be a driver of stellar wind and perhaps a means of synthesizing atoms. In their theory, the aluminum oxide grows into grains and aggregates in the dust shell. The aggregates move more when struck by light from the star. As they move away from the star, they encounter silicate dust and continue to move away from the star, causing the stellar wind (the continues flow of charged particles emitted from the star) to pick up. As part of this process, atoms such as silicon and oxygen may be formed. They also suggest the process prevents silicate dust from forming efficiently around the star.