Eruptions from one of the most active volcanic regions in the world sent plumes of ash and steam into the sky this week, as captured in a spectacular image by an Earth-monitoring satellite. 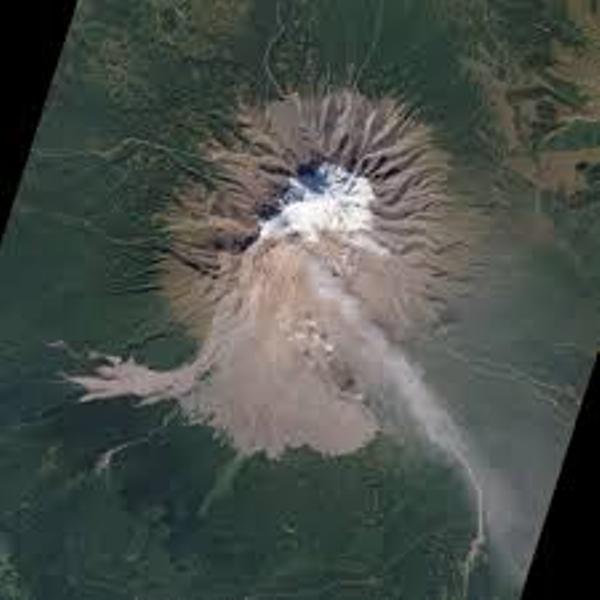 Shiveluch, a massive stratovolcano made up of ash and hardened lava, is located in the Russian Kamchatka Peninsula, near the Pacific Ocean. The volcano rises 10,771 feet (3,282 meters) above sea level, according to NASA, and behaves similarly to the volcanoes located in the nearby islands of Alaska. The Aleutian Islands, which sit in the Bering Sea and extend toward this Russian peninsula, are part of Alaska. According to the Smithsonian Institution’s Global Volcanism Program, the 49th state has produced 70 percent of all historical eruptions in the United States, and a “vast majority” of those have occurred in this region in particular.

In the image, Shiveluch is seen releasing a stream of ash that moves west, and the slightly smaller Bezymianny volcano is also seen jettisoning an eruption — of steam rather than ash — to the south, NASA officials said in a statement. The ASTER satellite captured the phenomena on Aug. 20, and the image covers an area of 12 miles by 14 miles (19.5 by 22.7 kilometers). [Astronaut in Space Sees Mount Etna Volcano Eruption (Photo)]

ASTER, which stands for Advanced Spaceborne Thermal Emission and Reflection Radiometer, is a dual-nation project: it is operated by NASA’s Jet Propulsion Laboratory and Japan Space Systems. ASTER observes changes to Earth’s surface and provides scientists from various disciplines with useful data, NASA officials said in the statement. The satellite monitors glacial movement, potentially active volcanoes, the physical properties of clouds, the degradation of coral reefs, the surface temperature of soils and crop stress, and thermal pollution.

The volcanoes themselves have also helped scientists to understand ancient vegetation. Millions of years ago, volcanic ash settled on sequoia and metasequoia trees after a volcanic eruption, which created the petrified forests that paleontologists can study today in places such as Unga Island in Alaska.