Super Typhoon Jebi – at 170 mph, the Earth’s strongest storm of 2018 – continues to roar in the western Pacific Ocean. Though forecast to weaken over the next few days, it’s still expected to make a direct hit on Japan early next week as a dangerous storm. 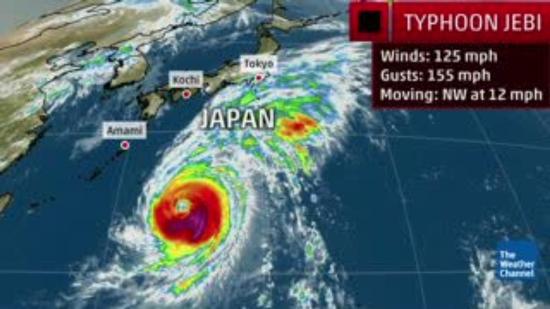 According to the Joint Typhoon Warning Center, as Jebi approaches Japan on Monday, the typhoon should have winds of 120 mph, gusting to nearly 150 mph. This would be equivalent to a Category 3 hurricane.

AccuWeather meteorologist Adam Douty said that “damaging winds and coastal flooding may be the most significant impacts with this storm.”

Japan has already been hit hard by other tropical systems, historic flooding and a deadly heat wave this year, AccuWeather said.

“Jebi would be the seventh named storm to impact Japan this year and comes on the heels of Cimaron, which slammed into Japan late last week,” according to AccuWeather meteorologist Jason Nicholls.