Meranti is now a super typhoon after rapidly intensifying into the equivalent of a strong Category 4 in the western Pacific Ocean. 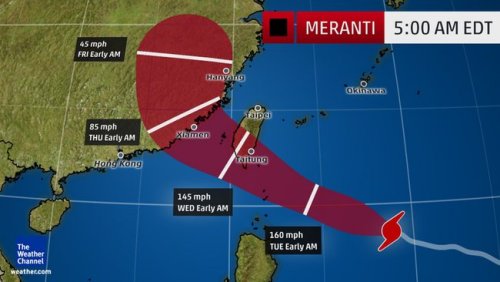 Parts of Taiwan, the northern Philippines and southeastern China will see impacts from this dangerous typhoon over the next few days.

As of Monday morning (EDT), Meranti was centered more than 600 miles southeast of Taipei, Taiwan.

Meranti is being steered to the west-northwest along the southwest periphery of an upper-level high pressure system that is located to its north.

The typhoon has undergone rapid intensification, which means maximum sustained winds increased by at least 30 knots (about 35 mph) in 24 hours or less. According to the Joint Typhoon Warning Center (JTWC), Meranti’s winds had increased from 80 mph to 130 mph in the 18 hours Sunday 5 a.m. EDT – 11 p.m. EDT.

As of Monday morning (EDT), the JTWC said that Meranti had become a super typhoon, which is when maximum sustained winds reach 150 mph or greater.

Although there is uncertainty in the forecast track, all interests in Taiwan, the northern Philippines and southeastern China should monitor Meranti’s progress and take appropriate action if needed.

In some ways, the forecast track for Meranti resembles the one Nepartak took in early July. Nepartak made landfall as a super typhoon (winds 150 mph or greater) near Taitung City in southeastern Taiwan as a Category 4 equivalent. It then moved into southeast China as a tropical storm.

Here’s a general timing of when Meranti’s impacts may arrive and what they may be. Keep in mind, however, that all of this will be highly dependent on the ultimate track that Meranti takes.

Possible impacts: Damaging winds, flooding rain, mudslides and storm surge flooding in areas that are prone.
Uncertainty: Meranti’s exact path in relation to Taiwan will dictate the severity of any wind impacts. If Meranti moves along the southern portion of the forecast path, this may keep the strongest winds near the eye just offshore from southern Taiwan, but heavy rain and flooding would still be major concerns. In addition, heavy surf and coastal flooding would be threats.

Possible Impacts: The Batanes and Babuyan islands are the most likely areas to see damaging winds and heavy rainfall depending on Meranti’s path. Far northern Luzon Island could also be brushed with heavy rain and strong winds, particularly if Meranti takes a more southern path.

China : Timing: Meranti is forecast to move into southeastern China late Wednesday into Thursday, local time. Areas from Hong Kong northward along the coast should monitor the progress of Meranti closely.

Possible Impacts: Potential threats in eastern China will greatly depend on how much the mountainous terrain of Taiwan disrupts the typhoon. At the very least, heavy rainfall can be expected, which may result in flooding. Damaging winds and storm surge flooding will also be potential threats.

Parts of Taiwan, particularly the southern and eastern sides of the island, could pick up over 12 inches of rain as Meranti passes near or just south of the island. Higher elevation locations will likely see the greatest rain amounts.

The heavy rainfall will then spread northward into southeastern China, with over 5 inches of rain possible along the coast.

Due to these copious amounts of rain, flooding and mudslides are both major concerns in Taiwan and southeastern China.

Another Typhoon After Meranti?

Well to the east of Meranti is another system that is developing in the western Pacific.

It could also threaten parts of east Asia later this week, possibly as a typhoon. The next named storm in the west Pacific would be Rai.

The latest forecast track for this potential typhoon curls it northeast into Japan’s Ryukyu Islands late this week. All interests there, including in Okinawa, should monitor this system closely the next several days.

Eventually this system could impact southern mainland Japan next weekend.