When NASA’s Transiting Exoplanet Survey Satellite launched into space in April 2018, it did so with a specific goal: to search the universe for new planets. 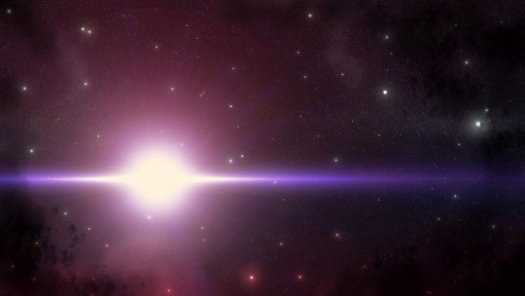 But in recently published research, a team of astronomers at The Ohio State University showed that the survey, nicknamed TESS, could also be used to monitor a particular type of supernova, giving scientists more clues about what causes white dwarf stars to explode — and about the elements those explosions leave behind.

“We have known for years that these stars explode, but we have terrible ideas of why they explode,” said Patrick Vallely, lead author of the study and an Ohio State astronomy graduate student. “The big thing here is that we are able to show that this supernova isn’t consistent with having a white dwarf (take mass) directly from a standard star companion and explode into it — the kind of standard idea that had led to people trying to find hydrogen signatures in the first place. That is, because the TESS light curve doesn’t show any evidence of the explosion slamming into the surface of a companion, and because the hydrogen signatures in the SALT spectra don’t evolve like the other elements, we can rule out that standard model.”

Their research, detailed in the Monthly Notices of the Royal Astronomical Society, represents the first published findings about a supernova observed using TESS, and add new insights to long-held theories about the elements left behind after a white dwarf star explodes into a supernova.

Those elements have long troubled astronomers.

A white dwarf explodes into a specific type of supernova, a 1a, after gathering mass from a nearby companion star and growing too big to remain stable, astronomers believe. But if that is true, then the explosion should, astronomers have theorized, leave behind trace elements of hydrogen, a crucial building block of stars and the entire universe. (White dwarf stars, by their nature, have already burned through their own hydrogen and so would not be a source of hydrogen in a supernova.)

But until this TESS-based observation of a supernova, astronomers had never seen those hydrogen traces in the explosion’s aftermath: This supernova is the first of its type in which astronomers have measured hydrogen. That hydrogen, first reported by a team from the Observatories of the Carnegie Institution for Science, could change the nature of what astronomers know about white dwarf supernovae.

“The most interesting thing about this particular supernova is the hydrogen we saw in its spectra (the elements the explosion leaves behind),” Vallely said. “We’ve been looking for hydrogen and helium in the spectra of this type of supernova for years — those elements help us understand what caused the supernova in the first place.”

“We would think that because we see this hydrogen, it means that the white dwarf consumed a second star and exploded, but based on the light curve we saw from this supernova, that might not be true,” Stanek said.

“Based on the light curve, the most likely thing that happened, we think, is that the hydrogen might be coming from a third star in the system,” Stanek added. “So the prevailing scenario, at least at Ohio State right now, is that the way to make a Type Ia (pronounced 1-A) supernova is by having two white dwarf stars interacting — colliding even. But also having a third star that provides the hydrogen.”

For the Ohio State research, Vallely, Stanek and a team of astronomers from around the world combined data from TESS, a 10-centimeter-diameter telescope, with data from the All-Sky Automated Survey for Supernovae (ASAS-SN for short.) ASAS-SN is led by Ohio State and is made up of small telescopes around the world watching the sky for supernovae in far-away galaxies.

TESS, by comparison, is designed to search the skies for planets in our nearby galaxy — and to provide data much more quickly than previous satellite telescopes. That means that the Ohio State team was able to use data from TESS to see what was happening around the supernova in the first moments after it exploded — an unprecedented opportunity.

The team combined data from TESS and ASAS-SN with data from the South African Large Telescope to evaluate the elements left behind in the supernova’s wake. They found both hydrogen and helium there, two indicators that the exploding star had somehow consumed a nearby companion star.

“What is really cool about these results is, when we combine the data, we can learn new things,” Stanek said. “And this supernova is the first exciting case of that synergy.”

The supernova this team observed was a Type Ia, a type of supernova that can occur when two stars orbit one another — what astronomers call a binary system. In some cases of a Type I supernova, one of those stars is a white dwarf.

A white dwarf has burned off all its nuclear fuel, leaving behind only a very hot core. (White dwarf temperatures exceed 100,000 degrees Kelvin — nearly 200,000 degrees Fahrenheit.) Unless the star grows bigger by stealing bits of energy and matter from a nearby star, the white dwarf spends the next billion years cooling down before turning into a lump of black carbon.

Type I supernovae are important for space science — they help astronomers measure distance in space, and help them calculate how quickly the universe is expanding (a discovery so important that it won the Nobel Prize in Physics in 2011.)

“These are the most famous type of supernova — they led to dark energy being discovered in the 1990s,” Vallely said. “They are responsible for the existence of so many elements in the universe. But we don’t really understand the physics behind them that well. And that’s what I really like about combining TESS and ASAS-SN here, that we can build up this data and use it to figure out a little more about these supernovae.”

This finding, Stanek said, provides some evidence that the companion star in this type of supernova is likely another white dwarf.

“We are seeing something new in this data, and it helps our understanding of the Ia supernova phenomenon,” he said. “And we can explain this all in terms of the scenarios we already have — we just need to allow for the third star in this case to be the source of the hydrogen.”

ASAS-SN is supported by Las Cumbres Observatory and funded in part by the Gordon and Betty Moore Foundation, the National Science Foundation, the Mt. Cuba Astronomical Foundation, the Center for Cosmology and AstroParticle Physics at Ohio State, the Chinese Academy of Sciences South American Center for Astronomy and the Villum Fonden in Denmark.