There are at least 20 to 40 volcanoes erupting on Earth at any given moment, but most of that volcanic activity is hidden from view at the bottom of the ocean. It is estimated that almost 5 cubic-miles of lava erupt every year along the mid-ocean ridges and submarine fault systems associated with subduction zones, where the oceanic crust is pulled into Earth’s mantle. This is twice the lava that erupts from all volcanoes found on land. 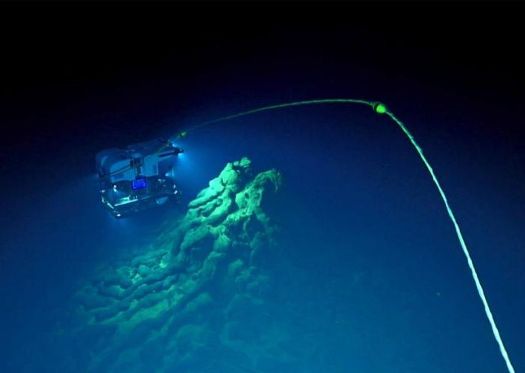 In 1973, the submarine Alvin by chance discovered “black smokers” on the seafloor near Hawaii. These underwater hot springs, named after the smoke-like 750 °F hot fluids that billow out from their vents, were the first evidence that there is geothermal activity to be found on the bottom of the ocean. In the last 500 years, only 17 deep submarine eruptions have been known, and even then mostly identified only by indirect evidence, like changes in the bathymetry of the seabed, plumes of volcanic ash and fluids dispersed in the water and by occasional pumice rafts appearing on the ocean surface.

Deep sea volcanoes are still poorly studied and most of what we know about submarine eruptions is based on studying outcrops, where the seabed was pushed by tectonic forces above the sea. When an eruption occurs under the water, water pressure prevents the explosions as seen on land. We do know that when lava erupts beneath the sea, it develops distinctive pillow structures. Cold water instantly chills the extruded lava, forming a thin crust that stretches to resemble a tube or pillows as new hot lava enters under it. As the pillow expands, its surface cracks, allowing some lava to flow out from it and form another pillow. Geologists would like to compare what they see in an outcrop with what actually happens during an eruption under water. Observing a submarine eruption is not easy. Rarely we know in time when an underwater volcano will erupt and expensive survey technology, like manned submarines or unmanned rovers, is needed to observe the eruption.

An international research team was quite lucky, as it apparently discovered traces of a very recent eruption of a still active submarine volcano. It is also the deepest volcanic eruption ever recorded. During a survey mission near the Mariana Trench in the Pacific Ocean, typical pillow structures were discovered at a depth of 14,000 feet. The submarine lava flow, as mapped following the pillow lava, is 650 to 2,600 ft wide, almost 450 ft thick and 4.5 miles long. Milky fluids rising from the ground indicated that the lava was still warm and therefore very young. A comparison with older surveys of the seafloor suggests that the eruption occurred sometime between 2013 and 2016.

Deep-sea volcanic eruptions differ in some important characteristics from volcanic eruptions in shallow waters. In 14,000 feet the water pressure is much higher as near the surface. Volcanic gases, important in pushing the lava out from the volcanic vents, can’t expand here as much as under normal conditions. The resulting eruption style is less violent. Also, rock fragmentation, caused by exploding bubbles in the lava, should be less effective, but the researchers found large quantities of broken rocks and ash. Apparently, the bottom water in 14,000 feet plays a major role in such a case. The cold (32-38°F) water coming into contact with hot lava flash-boils and expands enormously, and the force of the steam expansion deforms and fragments the lava. The researchers were also surprised how long the lava will stay warm despite the chilling temperatures. This observation may of interest for marine biologists, as such eruptions and their aftermath could provide a habitat for various lifeforms.